A Dow Without Boeing (BA)

For more than a year now, Boeing (BA) has been plagued by the 737 MAX crisis which has weighed on shares of the plane manufacturer with it now currently down nearly 20% from when the initial groundings took place on March 10th of last year. Despite this, while underperforming the broader market due to the 737 issues, the stock is actually still up just over 5% since the start of 2019.

Even though BA has lagged, it is still the highest-priced of the 30 stocks in the price-weighted Dow Jones Industrial Average. Currently trading around $338.50, the only stocks in the index holding a candle to BA are Apple (AAPL) and UnitedHealth (UNH), which also trade north of $300 per share. That means these stocks have the highest weighting in the index and therefore have a much larger impact than other stocks on the Dow’s performance.

While BA has been a drag on the DJIA since last March, it also provided a big boost to the index in early 2018 before the 737 issues hit the stock.  In fact, at the start of March 2017, BA was up over 36% YTD and the spread between the Dow’s performance with and without BA was around 700 points in the other direction as it is now! 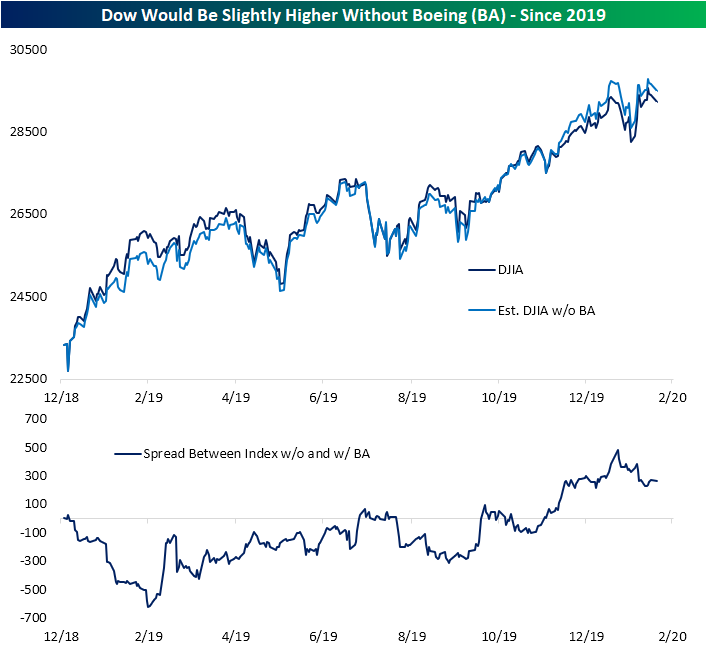 Another example of this dynamic in which high priced stocks have a greater impact on the index was observed on Tuesday when Apple’s (AAPL) stock fell after the company warned that Q1 revenues would be shy of prior guidance due to the coronavirus. The warnings sent shares down over 3% at its intraday lows, but the stock only finished down 1.83%. While there were equivalent or larger declines like Dow (DOW) or Walgreens Boots Alliance (WBA) in Tuesday’s session, AAPL’s declines by far weighed on the index more than any other stock.  Of the Dow’s 165.89 point decline, AAPL contributed 40.35 points.  Fortunately, UNH helped to mitigate some of those losses as it had a positive impact on the index of +22.79 points.  Start a two-week free trial to Bespoke Institutional to access our Closer, full list of interactive tools, and much more. 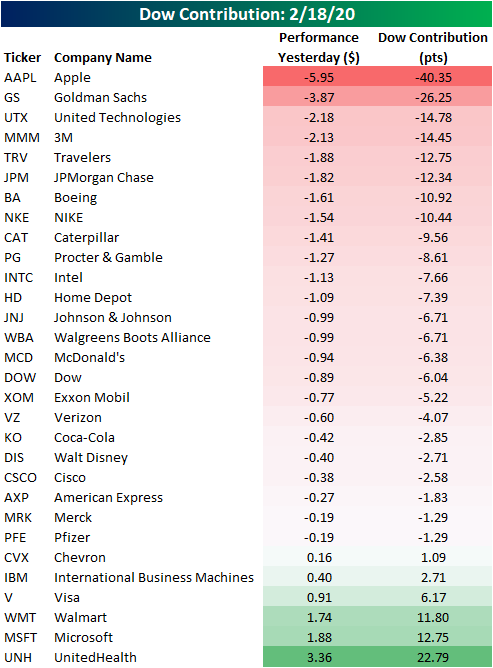 Boeing Still on Top of the DJIA

To say it has been a tough couple of days for anyone connected to Boeing (BA) would be an understatement.  In terms of the company’s stock, the last two days have seen the first back to back declines of 5%+ in close to a decade (June 2009).  As a result of this week’s decline, BA has lost its perch at the top of the DJIA in terms of best performers YTD, now coming in at number six.  That being said, the stock is still up over 17% on the year, and because of the DJIA’s unique way of weighting components by their share price rather than market cap, BA has still been the largest contributor to the DJIA’s YTD gains. Even more amazing? It’s still not even close.

The chart below shows the YTD attribution of each of the DJIA’s 30 components to the index’s total gain YTD.  Accounting for still more than 15% of the DJIA’s YTD gain, BA has had nearly twice the YTD impact on the DJIA so far this year as the next closest stock (Goldman Sachs – +8.7%).  The fact that BA still has had such an outsized impact on the DJIA even after its big decline this week shows not only how extreme its move higher to kick off the year was, but also how odd it is to weight a stock index by an arbitrary measure like each component’s share price.  One final note — it was somewhat ironic to see that the one stock that has had the most negative impact on the DJIA YTD is also the index’s newest component: Walgreen’s Boots Alliance (WBA) added last June. Looking for deeper insight on markets?  In tonight’s Closer sent to Bespoke Institutional clients, we provide a recap of today’s rejection of the Brexit deal and the continued turbulence in Boeing (BA). Next, we break down the S&P 500 industries distance from their 52-week highs. We note that the three industries closest to their 52-week highs are all Utilities. On the other hand, we look at Metals and Mining which currently sits the furthest from its highs, though, we show why the industry is not necessarily unattractive. We finish with a look at today’s release of NFIB Small Business Optimism and CPI. Today’s Morning Lineup is brought to you by the letter “B” as Brexit and Boeing are the major drivers of headlines this morning.  Regarding Brexit, while things looked promising ahead of today’s vote after last night’s deal between PM May and EU President Juncker, reality has set in overnight, and the prospects of the deal passing a vote in Parliament aren’t looking entirely promising at this point.  Meanwhile, Australia and Singapore joined the growing list of countries grounding flights of the 737 Max, and just now Malaysia announced the same.  While the FAA deemed the 737 Max airworthy overnight, it also sent a mixed message mandating Boeing to push certain changes to the 737’s flight control system by ‘no later’ than April.

In economic news, the NFIB Small Business Optimism Survey increased versus January but came in lighter than expected, while CPI was right in line with forecasts at both the headline and core levels.

Software has been a key group for the market over the last year, and yesterday’s rally took the S&P 500 Software group back within 1% of an all-time high.  On Friday, the index bounced right at what was former resistance levels which was an encouraging sign.  This group is dominated by Microsoft (MSFT) but is also comprised of Oracle (ORCL) Adobe (ADBE), and salesforce.com (CRM).  Watch this group in the coming days to see if it can lead the broader market higher. 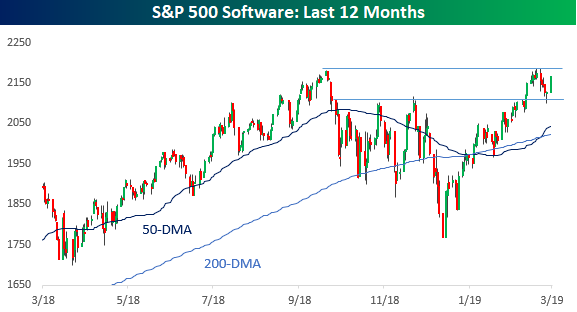