While you’re here, join Bespoke Premium for 3 months for just $95 with our 2020 Annual Outlook special offer.

Social media users unloaded on the popular stationary bike brand this week, criticizing the framing of an ad that depicted a video log of a woman using a bike her husband got her as a gift. The actor published a response to the vitriol this week. [Link]

Investigations into the practice of surprise billing revealed physician staffing firm TeamHealth used surprise bills to increase the rate at which it billed insurers. [Link]

Reporting by ProPublica and the New York Times reveals that consulting giant McKinsey played a critical role in developing practices which have attracted the greatest condemnation over the past couple of years: cutting food and medical care allocations, as well as detainee supervision. [Link]

While the Trump Administration is doing everything it can to reduce the number of refugees that the United States accepts every year, deeply Republican Utah is happy taking in more new arrivals. [Link; soft paywall]

Google co-founder Larry Page’s flying-car company promised that by the end of 2017, customers could purchase one of the light personal aircraft. Unfortunately, deployment hasn’t been so easy. [Link]

Illegal gold miners in Latin America tend to route their product through Miami, and while the negative effects of the mining aren’t directly felt by Floridians that doesn’t mean they aren’t serious. [Link]

Visualized: Ranking the Goods Most Traded Between the U.S. and China by Asley Viens (Visual Capitalist)

A helpful point of reference: the categories of trade goods that are most-traded between the United States and China. US imports are dominated by cell phones, computers, and routers, while exports to China amount to soybeans, airplanes, and some cars. [Link]

In a remarkable break from the norm, the nation’s largest coffee chain delivered a diversity report that showed no gap in pay between men and women and no racial pay gap either. [Link; soft paywall, auto-playing video]

A remarkable catalogue of management failure and the excessive work culture of popular luggage brand Away, where workers were subjected to dramatic demands by a management desperate to grow. [Link]

California’s public pension has fired most of the funds it uses to manage its external equity investment portfolio, taking the allocation to that space from $33.6bn to $5.5bn and reducing 17 managers to just 3. [Link]

Celebrities Seek Her Advice. M.B.A.s, Executives Line Up for Her Harvard Class. by Kathryn Dill (WSJ)

Harvard Business School offers a specific class on the business of stardom; this op-ed by the professor discusses her approach to the world of athletes and performers. [Link; paywall]

A look at the intense technology required to make old actors young again, deployed to great effect in The Irishman. [Link]

The Kingdom, the Heavyweights and the $60 Million Prize Fight in the Desert by Joshua Robinson (WSJ)

This weekend featured a massive prize fight hosted by the Kingdom of Saudi Arabia, featuring a temporary 15,000 person stadium, a $60mm purse, and the kind of glitz only money can buy. [Link; paywall]

The myth of crowding out by Jamie Powell (FTAV)

A summary of a recent paper that contradicts the widely-held belief that government budget deficits “crowd out” private investment by soaking up capital that would otherwise go to private projects. [Link; registration required]

The waste from coffee bean roasting at McDonald’s is being put to good use, getting included in auto parts used by Ford that reduce waste both during driving (the parts are lighter) and production (the parts use less energy to make). [Link]

A review of the biggest achievements of the decade in physics, from CERN’s Higgs bosons to the minute fluctuations caused by massive gravitational waves. [Link]

Looking for deeper insight on markets?  In tonight’s Closer sent to Bespoke Institutional clients, we begin with a look at just how strong semis have been this bull market as well as how credit spreads have changed over the past year. We then show just how Boeing (BA) and Walgreens (WBA) saved the Dow from a decline in today’s session.  Next, we show the massive move in breakeven yields and the tone of FOMC speakers in recent weeks. 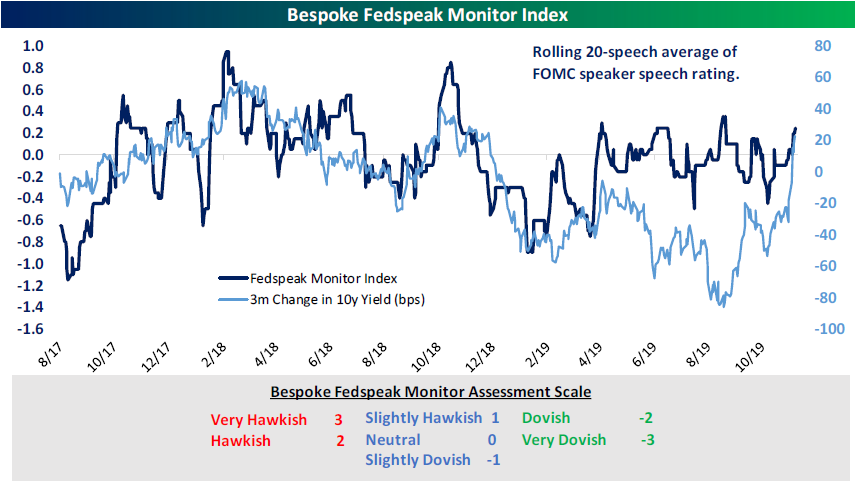 While you’re here, join Bespoke Premium for 3 months for just $95 with our 2019 Annual Outlook special offer.

Mobile payments leader Starbucks has been surpassed by Apple Pay, which now was more than 30mm US users accounting for 47% of total users who use proximity payment services. [Link]

Bespoke’s own Death By Amazon index shows that traditional retailers have been having a great year despite the rise of the e-commerce giant. [Link]

Part of an 11-part series on Tesla and related topics, this essay argues that internal combustion engines’ decline is a critical shift akin to the end of horses and rise of the automobile. [Link]

The Latest in Security for Hollywood Homeowners: “Laser Systems in Every Single Project” by Alexandria Abramian (The Hollywood Reporter)

Higher incidence of robberies and burglaries have the stars of the silver screen thinking more about their security and some of the results live up to the same over-the-top approach that celebrities bring to other kinds of consumption. [Link]

A detailed look at the story of Apple’s entry into the world of streaming, powered by an ocean of cash and a need to bolster services revenues, a risky play given the history of what makes winners in Hollywood. [Link; soft paywall]

An Undeserved Gift by Shane Mitchell (The Bitter Southerner)

The delicious oral history of okra, a key ingredient in the cuisine of the south that was part of the massive Columbian Exchange; the vegetable goes back so far into that history that nobody can when or how specifically it made its way from Africa to the Gulf Coast. [Link]

In early November, the chicken joint will resume its offering of chicken sandwiches which proved so staggeringly popular over the course of the summer, and it’s hiring extra workers to do so. [Link; soft paywall, auto-playing video]

Commercial kitchens are sharing space and workers in order to offer precisely tailored menus designed for takeout that appeals to users of Grubhub, DoorDash, and Uber Eats. [Link]

The Student Vote Is Surging. So Are Efforts to Suppress It. by Michael Wines (NYT)

College student voting rates doubled from 2014 to 2018, as young people increasingly turn out in opposition to the GOP; the response has been to restrict voting by students. [Link]

When a Charlottesville-based hedge fund manager Michael Bills ran the numbers, he realized he could buy more influence with state lawmakers than the local utility, so he did. This is both an amusing and slightly horrifying story about how basically (and legally) corrupt many lawmakers have become. [Link]

Bespoke’s Macro Strategist George Pearkes gave a convincing debunking of the conspiracy theory that insiders were moving around S&P 500 futures ahead of Presidential tirades (link), but apparently that wasn’t enough for some Democratic lawmakers who want more details; those details will inevitably disappoint the tinfoil hat crowd. [Link]

While nobody can accuse modern players or whole teams of throwing the World Series, there’s still plenty of evidence that more modest acts of cheating are commonplace. [Link]

Why Baseball in D.C. Finally Worked by Brian Costa and Jared Diamond (WSJ)

A story of how the Washington Nationals finally broke through after spending years in purgatory north of the border in Montreal. [Link; paywall]

Facebook CEO Mark Zuckerberg is a fan of Augustus Caesar, the princeps (“first citizen”) who helped transition Rome from a semi-republic to a full empire, and his weird haircut is one example of that appreciation. [Link]

How Boeing’s 737 MAX Troubles Are Affecting the Economy by Matthew C. Klein (Barron’s)

Boeing’s manufacturing operations are so large that the halt in sales (and orders) for just one of their models (the infamous 737-MAX) is having a very measurable impact on government economic statistics. [Link; paywall]

How to retire by 40 by Jamie Powell (FTAV)

An amusing set of tips for those who want to cut their working lives in half. [Link; registration required]

Cold calls by the hundreds, more than $100bn in AUM, and direct mail in industrial quantities: inside the sprawling empire that is Fisher Investments. [Link; soft paywall, auto-playing video]

If you’re willing to get a physical, sign a book-length waiver, and watch a two hour training video you are allowed to try the scariest attraction in America. If you can get through it without using your safe word, you’ll get a $20,000 reward. [Link]

An iconic – and somewhat laughable – figure in Times Square, the Sbarro pizza is being closed after opening 23 years ago. [Link]

Quantifying the benefit of advertising spending that is funneled through “influencers” gets complicated, leading to significant questions about how much value they provide. [Link; paywall]