The Dow Can Thank Boeing for Its Nosedive

It’s been a tumultuous month for the Dow Jones Industrial Average since its closing high on February 12th as the index has declined over 5,500 points or 18.8%.  Below we have provided a breakdown of which stocks have had the largest and smallest impact on the decline.  For each stock listed below, we have included its performance since the close on 2/12 in both percentage and price terms.  The reason, of course, for including price changes is because the index is price-weighted.  Therefore, a stock with a low share price but a large percentage decline may not have as large an impact on a stock with a larger share price but a smaller percentage decline. Because of this, the table is sorted by stocks with the largest weighting in the index (highest share price) at the top.

Remember the days when Boeing (BA) was the most heavily weighted stock in the DJIA?  Well, it was only a month ago!  Back on 2/12 when the DJIA last peaked, BA was the most heavily weighted stock.  But after a decline of nearly 40% since then, it’s now the fourth most heavily weighted behind UnitedHealth (UNH), Apple (AAPL), and Home Depot (HD).  Since 2/12, BA’s decline has accounted for almost 17% of the DJIA’s decline, or more than 900 points!  Not only has BA been the largest contributor to the DJIA’s downside, but the next closest drag on the index (Goldman Sachs – GS) has had less than half the impact to the downside.  Other relatively large contributors to the downside have been Apple (AAPL), United Technologies (UTX), and JPMorgan Chase (JPM).  On the upside, there hasn’t been much.  Since the DJIA’s closing high on 2/12, the only stock that is up is Walmart (WMT), but with a gain of 0.1%, its impact on the DJIA’s level has been less than a point.  I guess we’ll take what we can get!  Start a two-week free trial to Bespoke Institutional to access our full range of research and interactive tools. 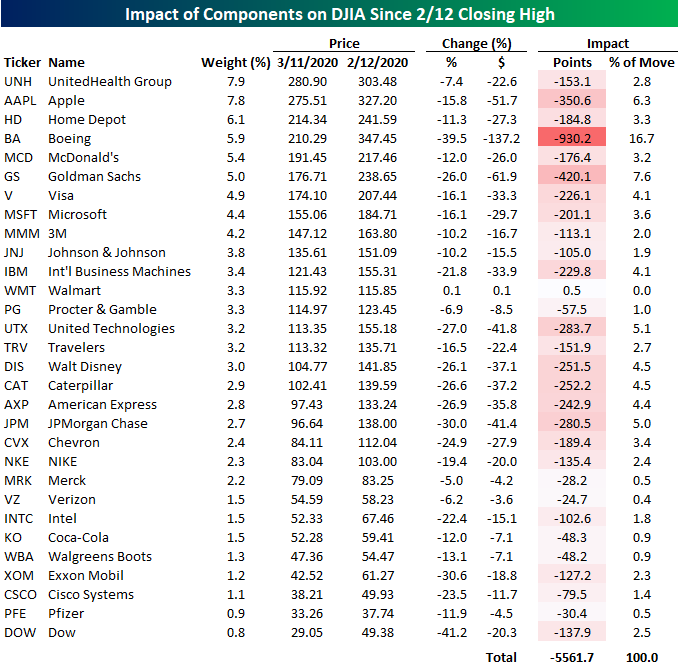