Chart of the Day: Intraday Strength

Four sectors have actually seen their market caps fall this year.  Health Care’s market cap has fallen the most at -$141 billion, while Energy has fallen $57 billion, Consumer Staples has declined $32.2 billion, and Utilities has fallen $29.9 billion. 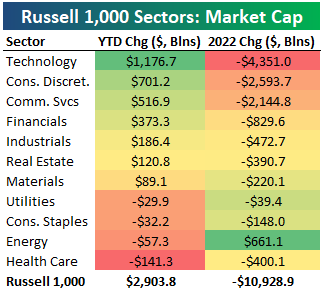 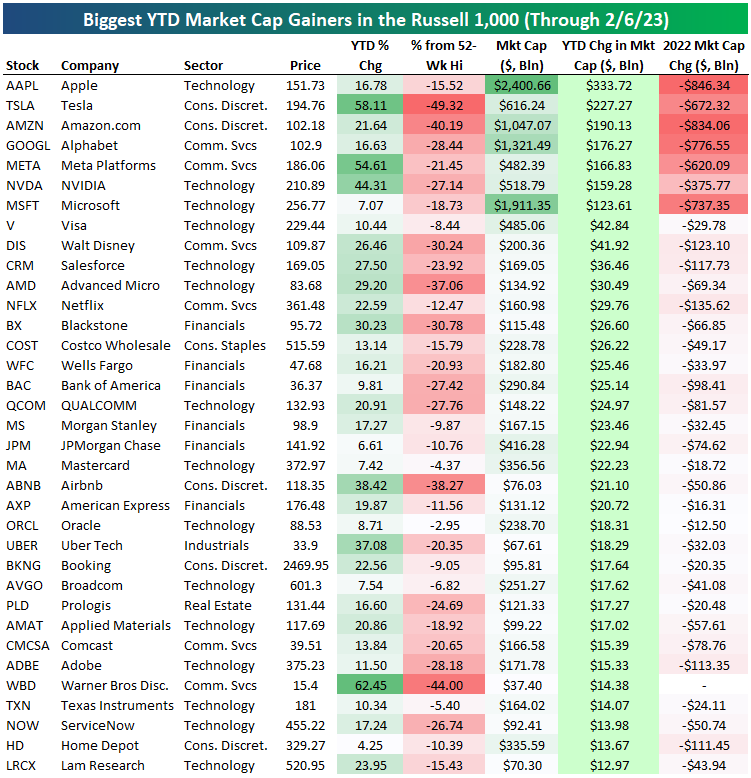 Much like Chat GPT has rocked the way people gather and consume information, 59 years ago today, the music scene in the United States was changed forever as John, Paul, George, and Ringo touched down at Kennedy airport for the first time.  The rest is history.  When the Beatles appeared on the Ed Sullivan Show less than two weeks later, around 40% of the US population watched.  Everywhere the band went they were swarmed by screaming (nearly all female teens) fans. For the imprint the Beatles made on both the music industry and pop culture, it’s hard to believe that within six years of first setting foot on US soil the band was no more.  The Beatles’ candle may not have burned for long, but the movement they sparked still shines today.

A single event watched simultaneously on TV by 40% of the US population will never be duplicated again, but the stampede of Chat GPT into the mainstream is an event unrivaled by any other product in history. According to a study by UBS, Chat GPT reached 100 million monthly active users in the span of two months putting it years ahead of Google Translate (78 months), Uber (70 months), Spotify (55 months), and Instagram (30 months).  Even TikTok took nine months to reach that milestone!  Chat GPT is to consumer tech what the Beatles were to music.  It will leave a permanent impact on society in terms of how people gather, produce, and consume information and who knows what else.  The only question is whether it will be the AI tool we’re still talking about years from now, or will it burn out and allow others to fill the void?  Just yesterday, Google launched its own AI technology called Bard to public testing, and according to Bloomberg, Baidu (BIDU) will launch its own service similar to Chat GPT by March.

These Chat tools may be the next big thing, but the stocks of the three companies launching them haven’t been particularly impressive. Shares of BIDU may be trading right near six-month highs, but the stock is still down over the last year and is trading for less than half of what it traded for at its peak in early 2021.  Last week, it closed above its 200-day moving average for the first time in more than 200 trading days ending its second-longest streak of trading below that level in its history as a public company. Its time above the 200-DMA didn’t last long, though, as it closed back below that level the following day and is down over 15% in the last six months.  Finally, Microsoft (MSFT) has the most direct exposure to OpenAI’s Chat GPT tool, but it too has been sucking wind. Like GOOGL, it only just recently traded above its 200-DMA and is still down more than 10% in the last six months.

Chat AI tools may be changing the world and there will be big winners, but the ones with the most immediate and direct exposure haven’t seen a big change in their fortunes. Maybe the fact that ‘everyone’ seems to be launching their own versions of these tools suggests that they don’t have a lot of scarcity value after all.

“Big Tech” stocks like Apple (AAPL), Amazon (AMZN), and Alphabet (GOOGL) have taken a breather over the past few days after reporting earnings last week.  It’s important to note, however, just how much these stocks had rallied leading up to their near-term highs last week.  Through last Thursday, the NYSE FANG+ had rallied 34.44% over the prior month.  That was actually its biggest month-over-month rally in the index’s history dating back to 2014!  As shown below, the index managed to make a “higher low” in early January just before it took off, and it just barely took out its highs from last August when it peaked last week before pulling back slightly. 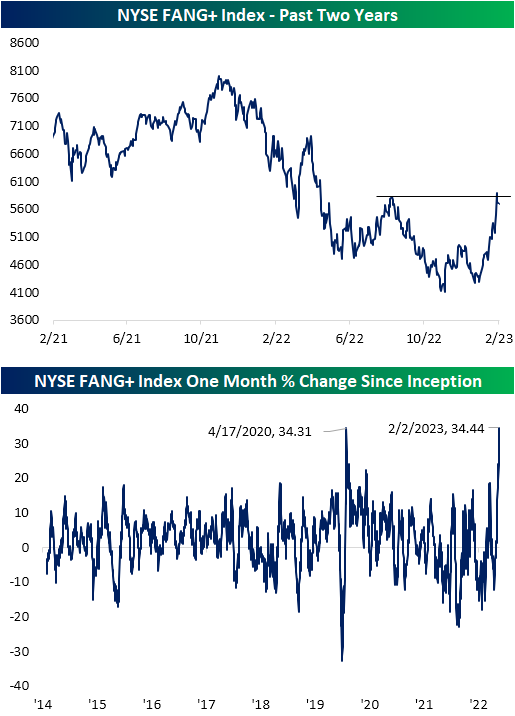 While last week’s earnings results provided some negative fundamental catalysts (some of which we highlight in our most recent Conference Call Recaps), there is also the technical aspect that this group of stocks had gotten historically overbought.  At last week’s highs, the 14-day RSI reached 77.4.  Normally, any reading above 70 would be considered overbought.  At 77.4, the RSI reading for the NYSE FANG+ index was the most elevated since June 2021 and ranked in the 97th percentile of all days since 2014.  After further declines to start out this week, the RSI is still elevated, but back below 70. Click here to learn more about Bespoke’s premium stock market research service. 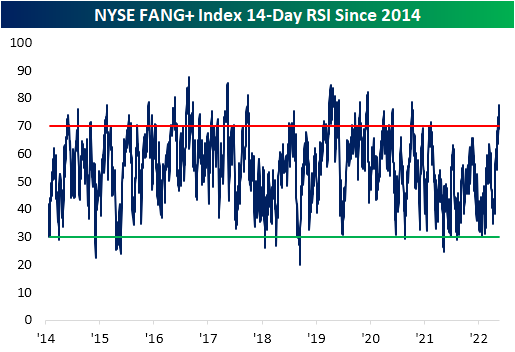 Chart of the Day – 1% Moves Become the Norm

There’s very little data to speak of this morning, or for that matter, the entire week, so investors will have to focus primarily on earnings and Fed Chair Powell’s speech at noon tomorrow.  Last week was the peak for earnings season in terms of the market cap of companies reporting, but in terms of quantity, it will be just as busy this week.  Markets are starting off on a negative footing as US Treasury yields continue their climb following last Friday’s jobs report.  After touching its 200-day moving average on Thursday at 3.29%, the 10-year yield is more than 30 bps higher this morning at 3.60%.  Even after the volatility of the last year, that’s quite a big move in a short period of time. Crude oil and natural gas, meanwhile, are both trading up over 1%.

Last week’s market word of the week was dispersion.  As shown in the snapshot from our Trend Analyzer, performance was all over the map with Communication Services leading the way higher with a gain of over 5% while Energy trailed falling nearly 6%. As a result of the moves, we finished off the week with two sectors at ‘extreme’ overbought levels (Communication Services and Technology) while Utilities, with its 1.4% decline, finished the week at ‘extreme’ oversold levels. 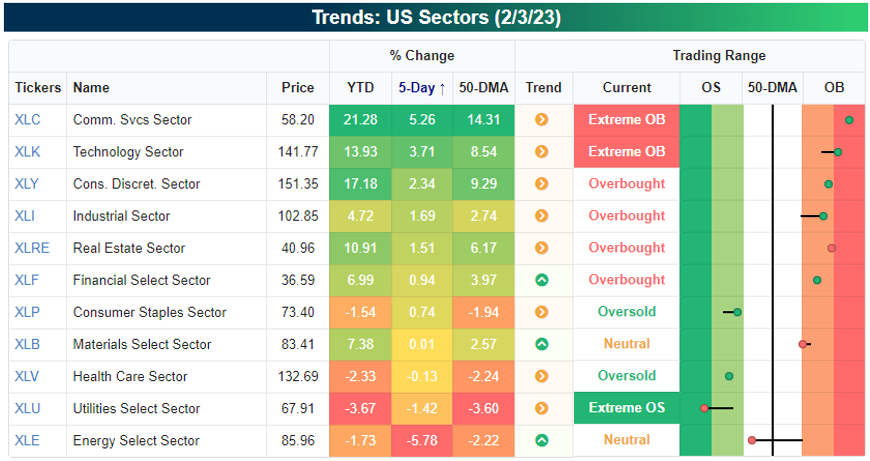 Energy and Utilities were the only two sectors down over 1% last week, and both of their price charts have been showing signs of deterioration.  After stalling out at a lower high earlier this year, Energy stocks have been under pretty significant pressure as both crude oil and especially natural gas have been weak.  If the declines continue this week, chart watchers will be focusing on support at the lows from late 2022 which also corresponds to highs from late in the Summer. The picture for Utilities has been even weaker.  That sector is now in a well-defined downtrend and last week’s decline resulted in a potential breakdown below support. 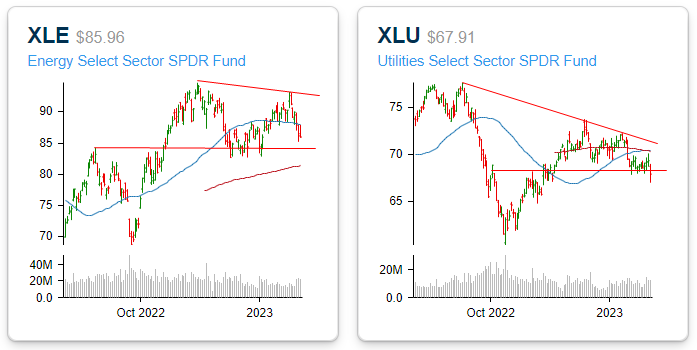 It seems strange to say after a year like 2022 but a number of sectors have also been breaking out to six-month highs.  Last week, Financials, Industrials, and Materials all managed to trade above multi-month resistance levels and trade to six-month highs.

This week’s Bespoke Report newsletter is now available for members.  (Log in here if you’re already a subscriber.)

In a blockbuster week for labor market data, the FOMC slowed the pace of rate hikes further but kept trying to talk tough about the outlook for rates. Equity, foreign exchange, and credit markets had different ideas both in the US and around the world. We dive deep into quarterly data on wages and productivity, monthly jobs numbers from the blockbuster Employment Situation Report today, PMI data from around the world economy, and other tidbits from the data this week. Earnings are also underway, and we provide qualitative and quantitative highlights from earnings results on both sides of the Atlantic this week.

View this week’s Bespoke Report newsletter by starting a one-month trial, or click the image below to view our membership options page. 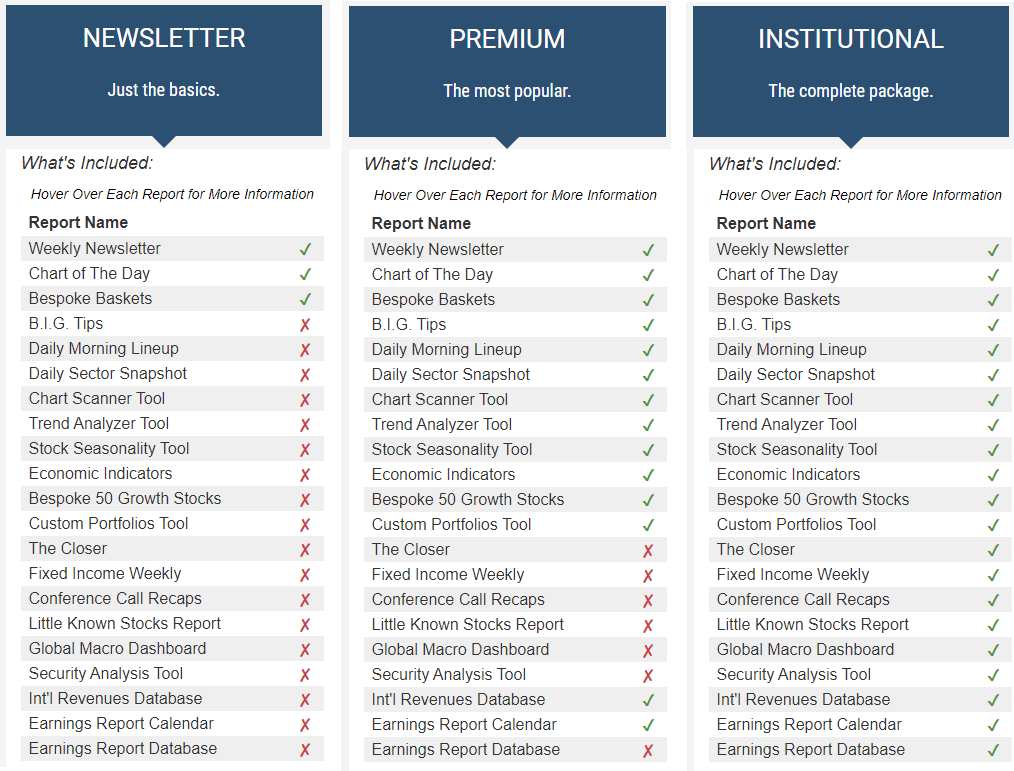 This content is for members only
« Older Entries
Next Entries »