“We should take comfort that while we may have more still to endure, better days will return.” – Queen Elizabeth II

The quote above from Queen Elizabeth was from a speech in the early days of COVID, and with life getting back to ‘normal’ in most western economies, she was definitely right.  The Queen’s comments from two years ago can also be attributable to the current market environment.  2022 hasn’t been enjoyable, and it’s more likely than not that investors will still have further volatility and losses to endure, but better days will come, even if – like COVID – those better days take longer than expected to return.

It’s been a busy morning of economic data today with ADP Employment missing expectations and showing the smallest level of job growth since April 2020.  Unit Labor Costs were also revised more than a full percentage point higher, while the revision of Non-Farm Productivity showed a slightly less negative number.  Jobless Claims were also just released, and on both an initial and continuing basis, the reported readings were lower than expected.

Heading into this morning’s data, futures were already higher, but they’ve given up some of those gains as interest rates ticked higher following the releases.

In today’s Morning Lineup, we discuss recent trends in the oil market (pg 4), activity in Asian and European markets (pg 4), and selected economic data from Asia and Europe, and the US (pg 5).

When it comes to semiconductors, we typically focus on the group’s relative strength versus the S&P 500 as a leading indicator for the broader market.  This morning, however, we wanted to highlight the actual price chart of the Philadelphia Semiconductor Index (SOX).  The group has been a steady outperformer in recent weeks, and unlike the major averages which are nowhere near their 50-day moving averages (DMA), the SOX has actually traded above that level in each of the last three trading days.  The only problem is that it also closed below that level all three times.  In market downtrends, declining moving averages often act as resistance, so the failed rallies of the last three days leave the bulls somewhat discouraged. 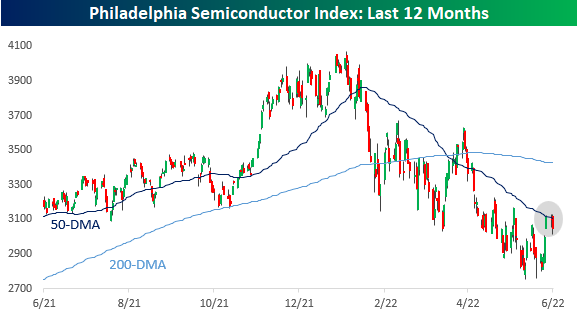 We were curious to see how common it is for the SOX to repeatedly run into resistance at its 50-DMA, so the chart below shows streaks where the index traded above its 50-DMA intraday but finished the day below that level.  The current streak of three trading days is the longest streak since August 2018, and to find a longer streak you have to go all the way back to August 2007.  While the current period has often been compared to the early 2000s, bulls can take some solace in the fact that there was never a similar streak in the years from 2000 through 2003. 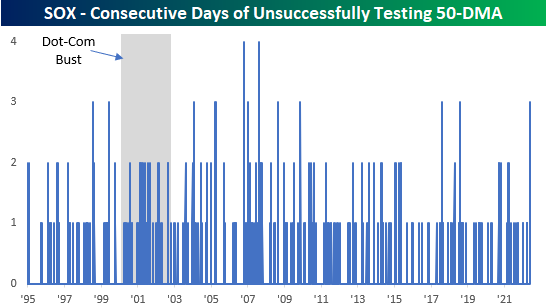 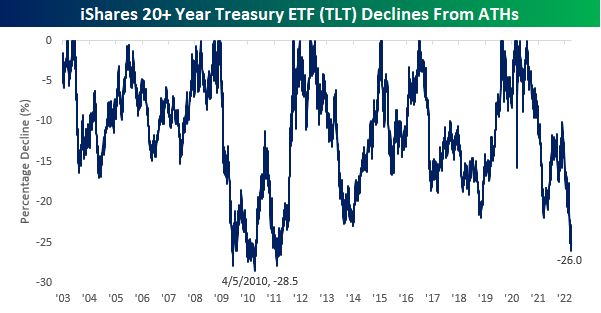 While Russia’s central bank and debt markets have been badly hobbled by sanctions, consumer payments are flowing thanks to the country’s homegrown payments system. [Link; paywall]

War with Russia? Finland has a plan for that by Richard Milne (FT)

Finland’s larger neighbor has long been a threat, and the response from Finnish society has been a layered approach that builds best practices for national defense into all aspects of social planning. [Link; soft paywall]

Democrats: Go Directly to the Center by Ruy Teixeira (The Liberal Patriot)

A plea for Democrats to hue away from the left ahead of midterms later this year, though whether they can recover from the traditional mean-reversion against the majority during a President’s first term regardless of their pitch to voters is an open question. [Link]

Why are women voters moving to the left? by Stephen Bush (FT)

Across the developed world, women are increasingly voting to the left, with the patterns holding across a range of countries over the past decade or so. [Link; soft paywall]

The fascinating story of how the former star of The OC has become a voice of reason and anti-crypto activist in the midst of a campaign against his fellow celebrities’ constant shilling. [Link; soft paywall]

Citrus fruits, scurvy and the origins of the Sicilian mafia by Alessia Isopi and Arcangelo Dimico (The Conversation)

The origins of la cosa nostra in Sicily during the 19th century are obscure, but probably had a lot to do with the booming demand for citrus brought on by a desire to keep sailors away from scurvy during long-distance sea voyages. [Link]

If the wind and solar industry can continue growing at its 10 year growth rate over the next decade, there will be enough renewable energy supplanting carbon-based generation to reduce sufficiently to limit warming to 1.5 degrees Celsius. [Link]

Class Attendance in College: A Meta-Analytic Review of the Relationship of Class Attendance With Grades and Student Characteristics by Marcus Credé, Sylvia G. Roch, and Urszula M. Kieszczynka (Review of Educational Research)

Regular class attendance is an incredibly consistent predictor of academic success across a wide variety of outcomes and controls, outperforming all other variables. [Link; 25 page PDF]