Volatile Stocks in Reaction to Earnings

With earnings season kicking off, we wanted to highlight Russell 3000 stocks that in recent history have been the most volatile in reaction to earnings (over the last ten quarters). In order to be included in this list, a stock must have reported at least ten quarters since going public and must also have a market cap over $1 billion. The list includes tech companies, e-commerce players, food producers, and more. On average, these stocks are down 35.1% on a YTD basis (median: -44.1%), which is notably worse than the overall market. We measured volatility by the median absolute percent change on earnings reaction days over the last ten quarters, and these names averaged a move of 13.6% in either direction on their earnings reaction days. The most volatile name has been Bill.com (BILL), followed by companies like Fastly (FSLY), New Relic (NEWR), Dycom (DY), and Pinterest (PINS). Only one of the stocks outlined below is in the S&P 500 (Etsy), and none have a market cap of more than $21.4 billion.

Of course, volatility does not imply direction. Of the 15 stocks outlined below, two – BILL and PINS – have seen seven of their last ten reports result in gains on their earnings reaction day. On the other end of the spectrum, four stocks have seen positivity rates of 40% or less over the last ten reports: Fastly (FSLY), New Relic (NEWR), United Natural Foods (UNFI), and Ambarella (AMBA). If you own any of these names, be prepared for a potentially sharp reaction to earnings (in either direction) when they report this earnings season.  Click here to learn more about Bespoke’s premium stock market research service. 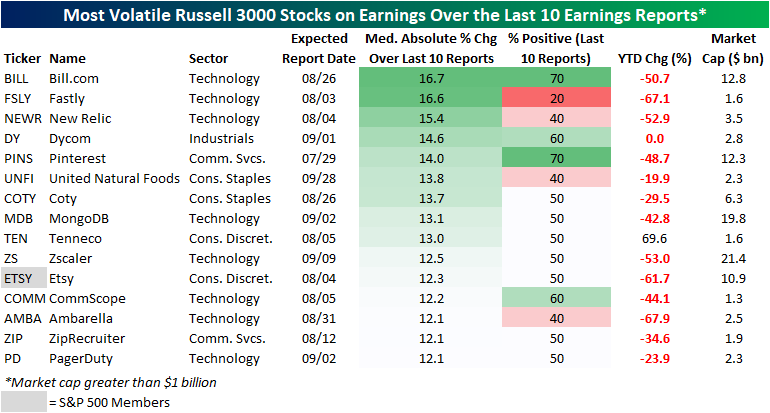 Just to show you what we mean, the graphic below shows BILL’s (the most volatile name on the above list) earnings reactions over the last 10 quarters. As you can see, eight of its last ten reports have been followed by a one-day reaction of 10%+, including four moves of more than 20%!  Click here to learn more about Bespoke’s premium stock market research service.