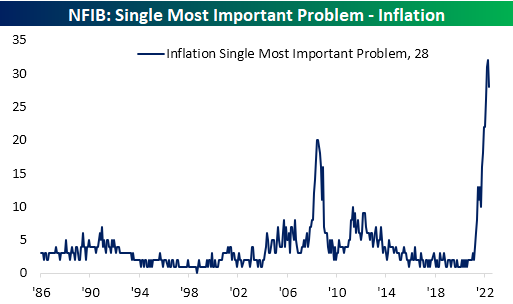 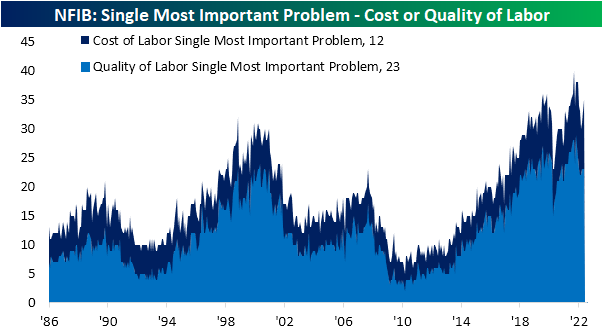 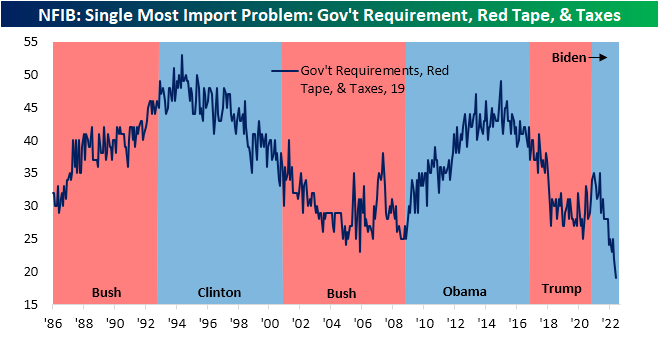 Sentiment on the part of small businesses deteriorated further in the month of March as the NFIB’s Small Business Optimism Index dropped 2.5 points to 93.2.  That took out the January 2021 level for the weakest print for the index since the start of the pandemic in the spring of 2020. 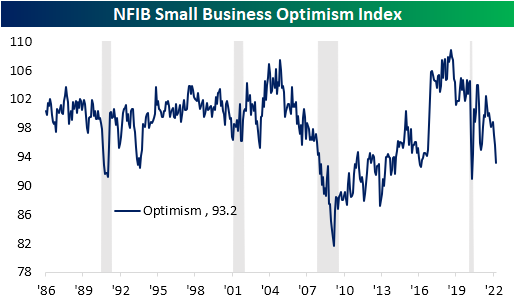 Considering the headline index is only a couple of points above the pandemic low, last month’s reading is only in the 16th percentile of all months on record going back to the start of the report in 1986.  The month-over-month decline was also historically large ranking in the bottom decile of all monthly changes. The same could be said for multiple other categories. For example, expectations for the economy to improve and expectations for higher real sales came in at or close to record lows as the month-over-month declines were in the bottom 2% of all monthly moves.  This downbeat sentiment was a complete disconnect from the levels of actual sales changes (more on this below). On the other hand, there is a wide variation across categories with top decile readings for several indices like plans to increase employment, current inventories, job openings hard to fill, and compensation-related indices. 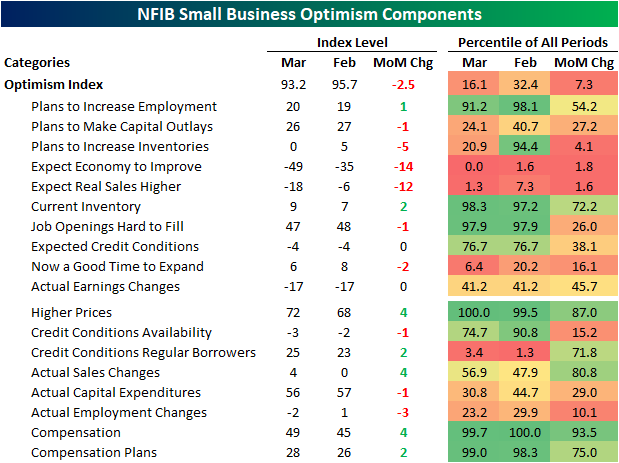 Many of the strongest readings of the report are related to employment.  Plans to increase employment have pulled back significantly from pandemic highs and are back within the range of readings from the few years prior to the pandemic. Regardless, March’s reading was in the top decile of historical readings. Actual reported changes to employment, however, have continued to fluctuate around zero and were negative in March meaning small businesses saw a decrease in hiring. That lack of hiring comes as businesses continue to report historic difficulty in filling open roles. This reading too has been rolling over though. That is echoed by fewer businesses reporting the cost or quality of labor as their single biggest concern. That combined reading has fallen from a high of 40% in September of last year to only 30% today. As other issues (namely inflation) have taken precedent as the main concern of small business owners, cost of labor remains elevated with near-record but peaked readings in compensation and compensation plans. 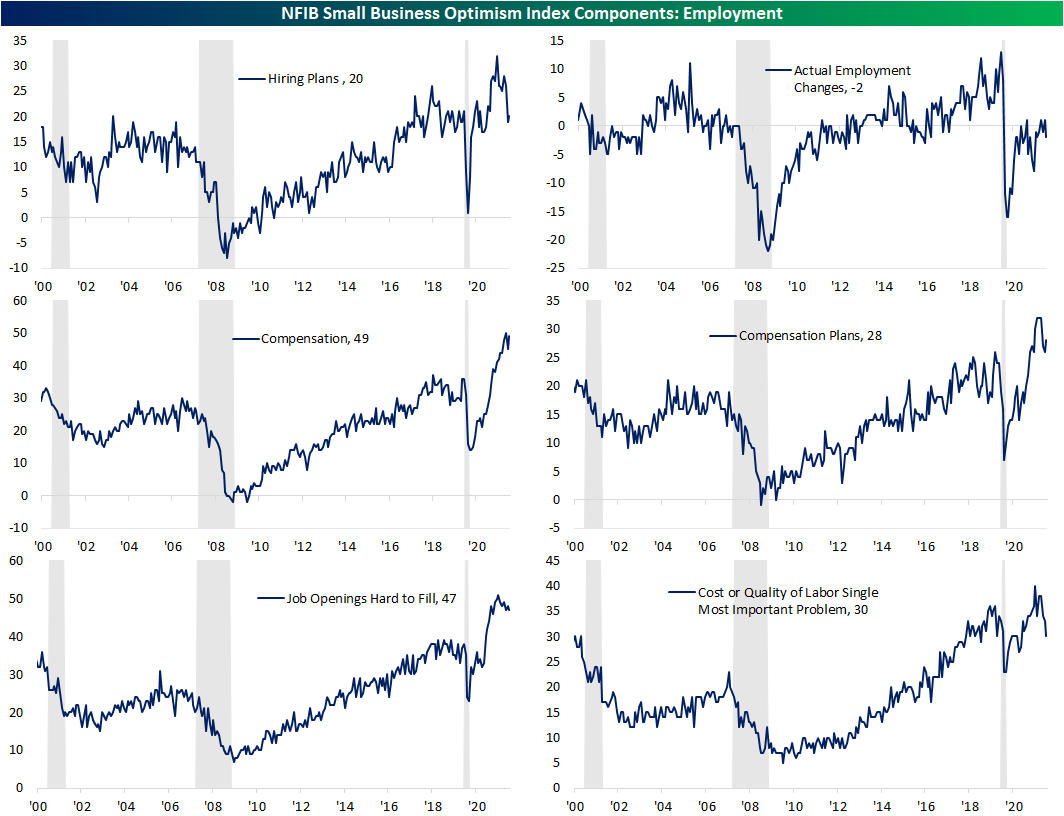 As employment metrics remain elevated but show signs of rolling over, readings on expectations for general conditions and sales remain weaker.  Outlook for general business conditions stands out as the weakest reading of the report as the index dropped another 14 points in March to set the bar even lower for a record low. Given the pessimism surrounding business conditions, the share of businesses reporting now as a good time to expand fell for the third month in a row to match the February 2021 low. One likely reason for the aforementioned pessimism is soaring prices shown through yet another record high set by the higher prices index.

Not only has the outlook for general business conditions soured, but so too have sales expectations.  Small businesses reported the worst expectations for sales since the spring of 2020. The only other period in the history of the data going back to 1986 with as weak of an optimism reading for sales was during the Great Recession. That stands in stark contrast with the actual reported sales changes.  Small businesses actually reported positive momentum for sales, though, higher costs are likely eating into profitability as actual earnings changes went unchanged at deeply negative levels. In the release, the NFIB highlighted that of those respondents who reported lower profits, 35% blamed higher material costs and 13% reported higher labor costs. Another 23% blamed weaker sales. Click here to view Bespoke’s premium membership options. 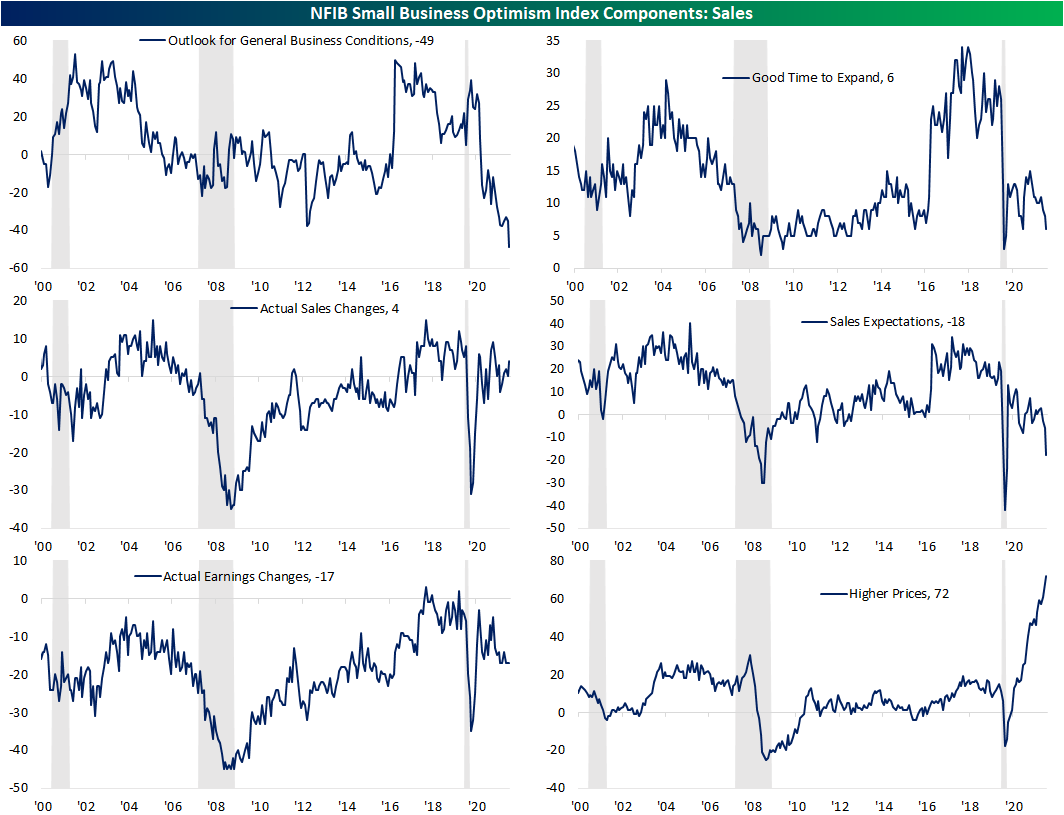