IPOs in Worst Drawdown Since the Dot Com Bust

In an earlier post, we noted the dramatic underperformance of IPOs in the past year using the Renaissance IPO ETF (IPO) as a proxy for newly listed companies.  One downside of using the IPO ETF is that it only began trading in 2013. To get a gauge on IPOs going further back, below we have created an index using the Bloomberg IPO index starting in August 1994 through October 2017 when it was discontinued, then switching to the performance of the IPO ETF in the time since then.  The two measures of IPOs are not perfectly like for like given differences in methodology (for example, the Bloomberg index only tracked companies that debuted in the past year versus three years for IPO), but combining the two still helps us compare the current drawdown versus prior ones dating back to the early 1990s.

Since peaking with the rest of the most aggressively valued stocks in early 2021, IPOs as a group are in a 60%+ drawdown!  While we’ve seen multiple drawdowns of at least 30% for IPOs over the years (during the Financial Crisis, the late 2018 sell-off, and the COVID Crash), the current drawdown has been bigger than any period except for the Dot Com bust from 2000-2002.  In case you weren’t aware of how painful the declines have been in “growth” areas of the market like IPOs, one look at the second chart below should do the trick.  Click here to learn more about Bespoke’s premium stock market research service. 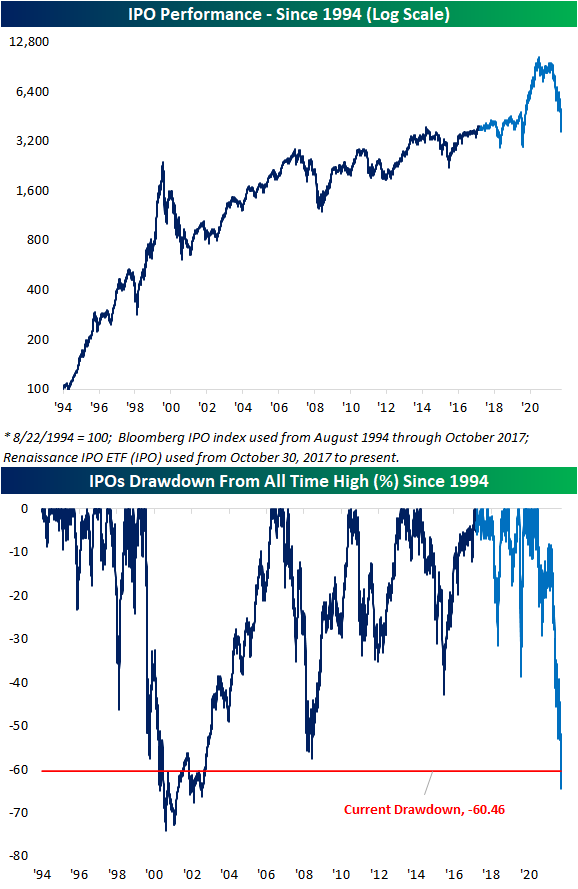