“It can be terribly dangerous, even perilous, to assume that because people hold positions of responsibility they are therefore acting responsibly.” – David McCullough

That rally lasted long.  After bouncing from the last hour on Friday through yesterday, US stocks are set to open down by over 1% this morning following Snap’s (SNAP) earnings warning and its comments regarding the weakening broader macroeconomic environment.  Adding to the concerns regarding the economy, preliminary PMI readings out of Europe also came in lower than expected.  The US versions of these reports will be released later this morning.  Given these growth concerns, treasuries are rallying as the 10-year yield drops back down to 2.82%.  Oil prices, however, are largely unchanged on the day.

In today’s Morning Lineup, we recap on the latest declines in the tech sector (pg 4), Asian and European markets (pg 4), COVID case numbers (pg 5), the latest economic data out of Asia and Europe (pg 5), and a lot more.

After a 1.87% gain for the S&P 500 (SPY) yesterday, we’re seeing the inverse of a “Turnaround Tuesday” this morning with SPY set to open lower by just over 1%.  Since 1993 when SPY began trading, there have only been five prior instances in which SPY rose 1%+ on a Monday and then gapped lower by more than 1% the next morning.  As shown below, SPY continued lower from the open to the close on four of the five prior Tuesdays, and one week from the Tuesday open, SPY was down all five times for an average decline of 2.3%. One step forward, two steps back. 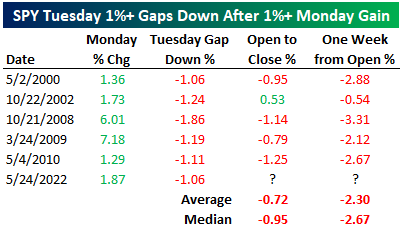