At the end of June, the Supreme Court issued a ruling that expanded gun rights, prohibiting certain restrictions on carrying. This may have contributed to the rise in background checks this month, but there are other factors that likely contributed as well. Democrats are now expected to retain control of the Senate according to betting markets, and the Biden administration has proven their ability to enact legislation, so Americans may be worried about further gun control legislation. Additionally, the FBI’s raid of former President Trump’s Mar a Lago home could have added to the perception of domestic political instability. Click here to learn more about Bespoke’s premium stock market research service.

Although background checks rose by 4.7% month over month, they are still down 7.3% y/y. This is largely due to tough comps, as heightened geopolitical uncertainty and volatility in 2020 and 2021 led to extreme increases in background checks. We are now essentially out of the COVID-era, the Russia-Ukraine conflict is no longer top of mind for Americans, and the questioning of 2020 election results appears to be a thing of the past, and a more relaxed state of affairs has led to declines throughout 2022. However, the rate of decline has been leveling out. Through August, the number of background checks on a YTD basis has declined by 25.3%, but the y/y decline of just 7.3% for the month tells us that we have likely already experienced the largest declines in background checks on a percentage basis. It would not be unreasonable to expect checks to rise as we head into midterm elections.

Background checks are still in a longer-term uptrend. At 2.5 million, August’s figure ranks in the top 15.1% of all months since NICS began reporting this data in 1998, and outside of late 2019 through 2021, there were only a few months that the number of checks was higher. Still, they are down 46.3% from the all-time highs seen in March 2021. This may be because demand was pulled forward, but it could also be due to a more normalized domestic situation. Click here to learn more about Bespoke’s premium stock market research service.

Sturm Ruger (RGR) and Smith & Wesson (SWBI) are the two publicly traded stocks with direct exposure to these trends. Historically speaking, the monthly performance of these stocks tends to be correlated to the trailing twelve-month volume of background checks. Although background checks rose month over month, the near-term downtrend persists in checks, which is following through to the performance of these two stocks. Over the last month, RGR and SWBI are down 20.7% and 4.8%, respectively. Click here to learn more about Bespoke’s premium stock market research service.

We track the number of NICS firearm background checks on a regular basis as it often provides interesting insights on the mood of Americans or the direction of political winds regarding gun control legislation.  In times of higher volatility, uncertainty, or concerns that lawmakers in Washington will enact stricter legislation for firearms, purchases tend to rise. On the other hand, in periods of stability, background checks tend to fall. Ever since June of last year, background checks have been declining on a y/y basis, but the y/y decline moderated in June. Although still down 15.8% compared to last year, purchases moved higher sequentially for the first time in three months. Click here to learn more about Bespoke’s premium stock market research service.

Although checks moved higher month over month, they are likely to rise even further in July due to the Supreme Court’s recent ruling against the state of New York. This case expands the right to carry, and will likely increase firearm purchases in some of the most restrictive cities, such as New York and Los Angeles. In June, background checks rose by over 230K to reach 2.6 million. Although checks are in a near-term down-trend following the COVID spike, the longer-term uptrend is still very much intact.

On a YTD basis, background checks have declined at the fastest rate on record. This is largely due to elevated comps, as 2021 saw background checks near record levels due to a growing political divide, COVID lockdowns, and fears over legislation with Democrats in full control of Washington D.C. 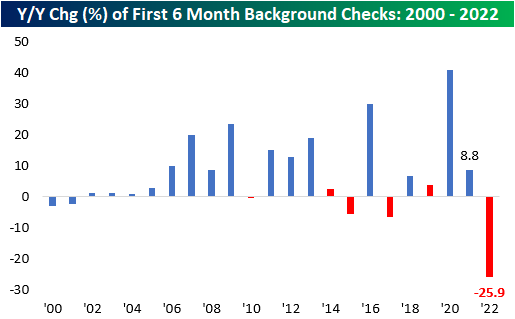 Although background checks moved higher month over month, Sturm Ruger (RGR) and Smith and Wesson (SWBI) hit 52-week lows in June. All-in-all, RGR traded 6.3% lower in June, and SWBI declined 15.2%. The stocks have been weighed down by slowing sales over the last couple of quarters, increased legal risk associated with firearm manufacturer liability, and the pull of the overall market tide. Both these stocks are still in sustained downtrends, and even after initially moving higher following the Supreme Court decision, both stocks have essentially come full circle.  Click here to learn more about Bespoke’s premium stock market research service. 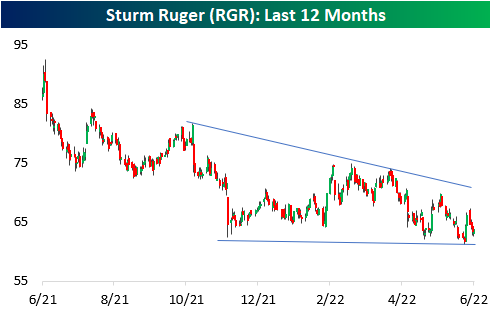 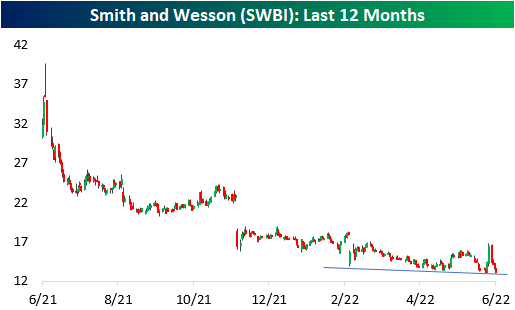 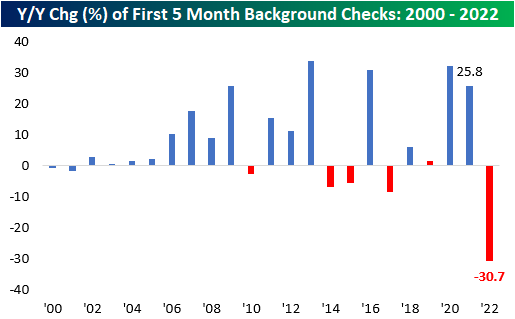 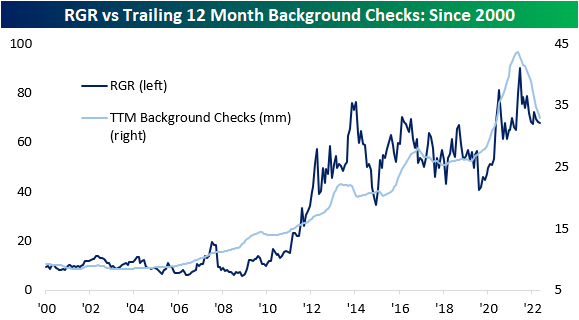 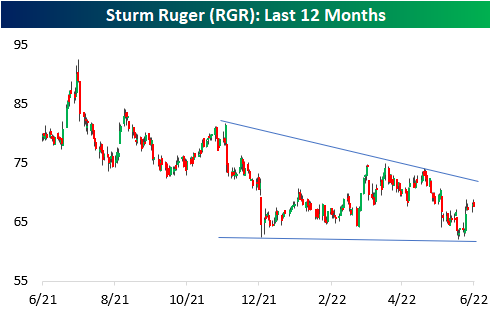 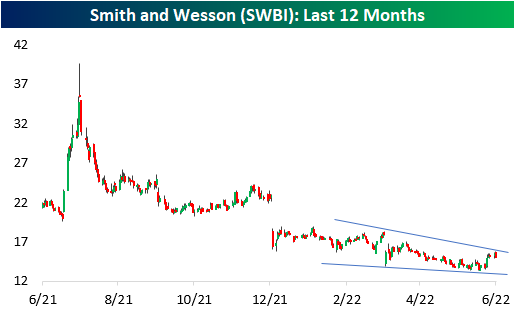 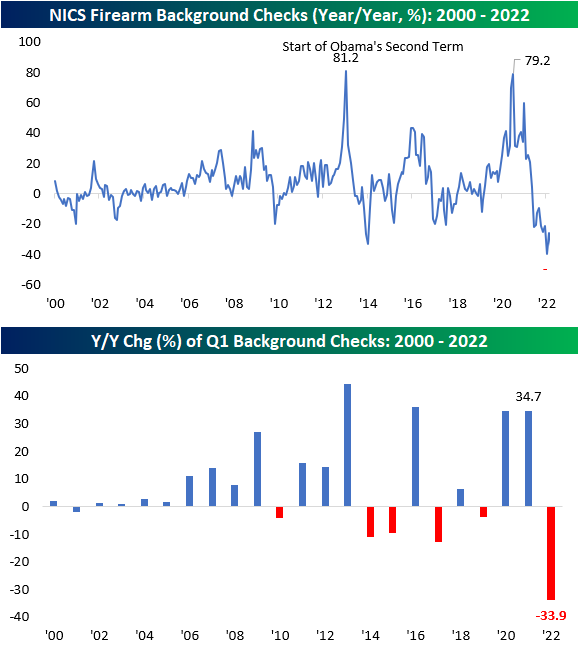 Monthly background checks remain well above their historical trend, despite the y/y compression. In the near term, it is possible that checks bottomed out last month at 2.6 million. Long story short, although checks are down significantly y/y, the long-term uptrend that was in place prior to the COVID surge is still largely in effect.

Although we like to think that the market is forward-looking, the price action of gun manufacturer Sturm Ruger (RGR) tends to be highly correlated with the number of background checks over the prior twelve months. Since the turn of the century, total trailing 12-month total of background checks and the monthly price of RGR have held a correlation coefficient of 0.90, which indicates a strong positive relationship. Should background checks tick higher, RGR has room to benefit. 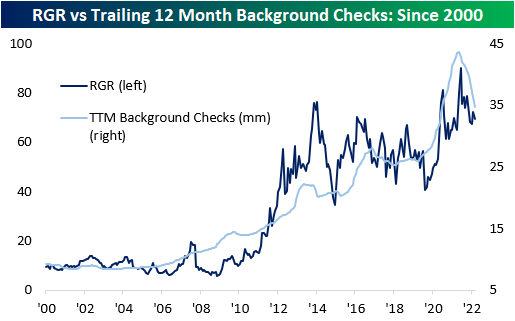 Looking at the two different publicly traded firearms manufacturers, the chart patterns for each look quite different. Whereas RGR has been in a short-term uptrend, Smith and Wesson (SWBI) has been trending lower for several months now, despite a positive federal court ruling in regards to turning over research data and advertising research to the NJ Attorney General just three weeks ago. Nonetheless, this goes to show that, even though these companies are exposed to the same secular trends, near-term performance can and will diverge due to company-specific exposures. Click here to try out Bespoke’s premium research service. 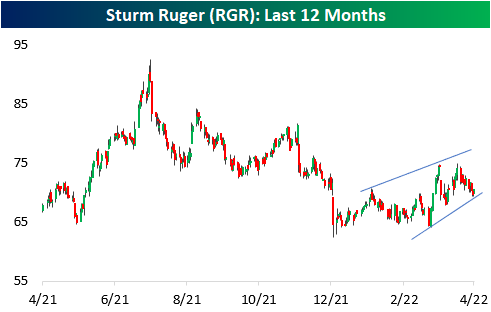 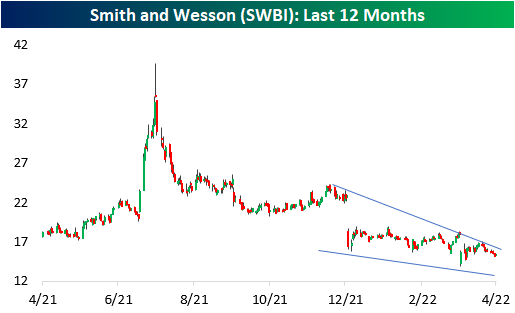