“In spite of the cost of living, it’s still popular.” – Kathleen Norris

The CPI report that everyone was waiting for has finally arrived and as is usually the case when everyone expects the worst, the results weren’t as bad as feared (although they’re far from good).  On a headline basis, CPI rose 1.2% m/m which was right in line with forecasts.  Core CPI, however, rose ‘just 0.3%’ compared to forecasts for a gain of 0.5%.  Given the weaker than expected core reading, futures have shot higher with the Nasdaq up nearly 1%.  As equities have rallied, Treasury yields are falling but still high even relative to where they were last week!

Make no mistake, these readings are still very high relative to recent history.  For example, backing out the period since 2020, the 0.3% increase in m/m Core CPI would have been the highest since March 2006.  Compared to recent trends and what people were expecting, though, this morning’s report was a positive surprise.

We all know that recent inflation data has been high, but the consistency of upward pressure has been incredible.  It’s a popular narrative that the Fed is behind the curve, but they’re not the only ones.  Economists have simply not been able to catch up and get ahead of the persistent trend of rising prices.  The chart below shows the rolling 24-month total of the weaker than expected m/m headline CPI reports going back to 2000.

During this span there have only been three months where headline CPI came in weaker than expected.  Three!. Going back to 2000, there has never been a period where weaker than expected CPI reports were as scarce as they have been in the last two years. 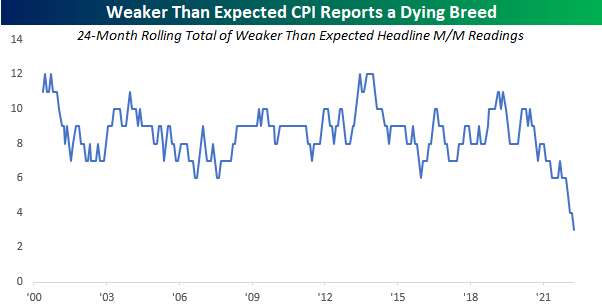