Whether you’re looking at monthly, quarterly, or first-half performance, this year’s S&P 500 performance has been quite weak. As investors, we must avoid falling into the sunken-cost fallacy and are forced to be forward-looking.

Starting with weak months, there have been a total of 83 months in the post-WWII era in which the S&P 500 declined at least 5%. In fact, this has occurred three times in 2022 alone, and if the current pace continues will top the post-WWII high in 2008 when there were five months of 5%+ declines. Click here to learn more about Bespoke’s premium stock market research service. 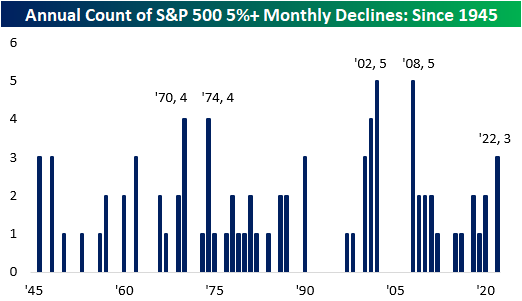 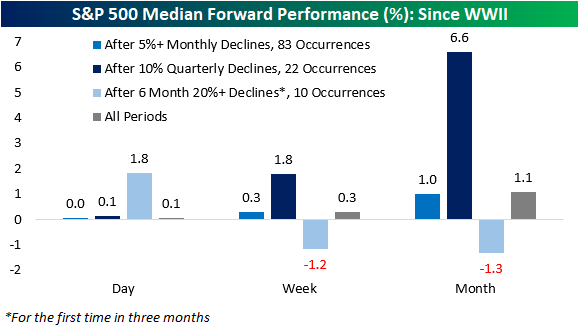 Taking a look at positivity rates (percent of the time the S&P 500 has posted gains in a respective period), the S&P 500 has boasted above average rates following a monthly decline of 5%+ in both the next day and month, but rates are lower over the following week. After quarterly declines of 10%+, positivity rates were lower in the following day, but above average for the following week and month, coming in at 61.9% and 71.4%, respectively. On the downside, positivity rates were much lower following the first rolling six month decline of 20%+ in the next week and month, coming in at 40.0% for both. Investors should note that the first occurrence of a 20%+ rolling six month decline occurred on June 16th. Click here to learn more about Bespoke’s premium stock market research service. 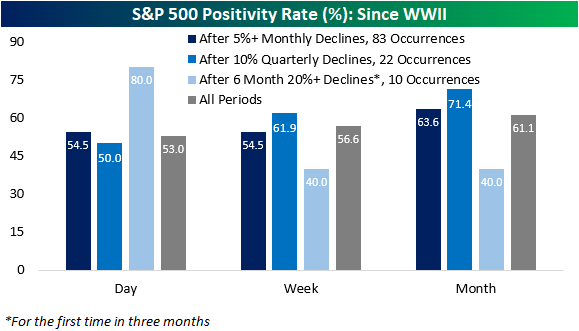