“No fact begins with if” – Nicholas II

With the entire world focused on the Russia-Ukraine war and possible scenarios under which President Putin can either ratchet up or dial back the tensions, it’s ironic that today marks the 105th anniversary of the start of the ‘February Revolution’ which essentially ended the reign of czarist rule in Russia when Nicholas II abdicated his throne.  Historians cite a number of factors for the February Revolution including frustration with government corruption, a poor economy, and autocratic rule, but the Russian military’s poor performance in World War I was the primary catalyst for the Revolution.  Russians came out in droves to protest the conditions and despite an attempted crackdown Russian police and ultimately the military, the protestors refused to back down.  Within less than a week, Nicholas II abdicated the throne ending the era of czarist rule in the country.

Not long after Nicholas abdicated, Vladamir Lenin returned from exile in Switzerland to lead the Russian Revolution, and as he is often credited with saying, “There are decades where nothing happens, and there are weeks where decades happen.”  During the February Revolution, it took less than a week for protests to lead to the abdication of the throne by Nicholas II and usher in the communist era.  The current Russia-Ukraine war hasn’t even been two weeks yet, and several years from now, with the benefit of hindsight will we be looking back on this period as another one of those moments where ‘decades’ occurred within a matter of weeks?

Futures are looking pretty boring at current levels as we type this with little change in any of the major averages, but since the close yesterday, we have seen them trade down more than 1% and trade up by close to 1%.  One thing we can pretty much bank on here is that equity indices will not finish the day where futures are currently trading.

In the commodity space, we’re still seeing some intense moves as nickel prices more than doubled to over $100,000 per metric ton resulting in a halt of trading for the remainder of the day.  Given that move, the 2% rally in crude oil looks downright pedestrian.

Lastly, on the economic calendar, the NFIB Small Business Optimism Index came in lower than expected falling from 97.1 last month to 95.7. 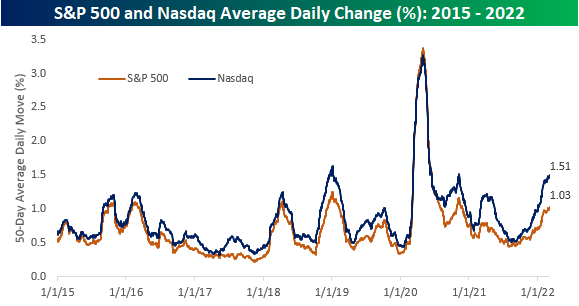