Global equities are surging this morning following yesterday’s rally in the US.  In Asia, Chinese and Hong Kong stocks surged following some policy changes from the Chinese government and positive comments related to overseas listings of ADRs.  Led higher by tech, the Hang Seng was up over 9%, but to put that rally in some perspective, the index is still down 2.5% over the last week.  That’s how oversold Hong Kong was heading into the session!

We’ve got a busy slate of data on the docket today with Retail Sales, Import Prices, Business Inventories, and Homebuilder sentiment all coming out between 8:30 and 10:00 AM.  Retail Sales were weaker than expected across the board with the ex Autos and Gas reading actually declining.  One silver lining was that January’s reading was revised higher.  Import Prices, however, also came in weaker than expected on both a m/m and y/y basis.

As if that wasn’t enough, the Fed will announce its first rate hike at 2 PM and then Chair Powell will hold a press conference at 2:30.  And as has been the trend during his tenure, when the Fed Chair speaks, people sell.   Also, don’t forget, Ukrainian President Zelenskyy will address Congress at 9 AM Eastern.  It’s going to be a busy day!

Yesterday, the Senate approved a bill to make Daylight Savings Time a permanent feature beginning in 2023.  Obviously, the most important thing to consider when a change like this is made, is what will the impact be on the market?  To answer that question, in the table below, we calculated the performance of the S&P 500 during Daylight Savings time (DST) and Standard time going back to 2007 when the start of DST was moved to early March.  For each year, DST performance shows the S&P 500’s change from the March start through the November end while the Standard time performance shows the change from the start of Standard time in November through the beginning of DST in the following year. 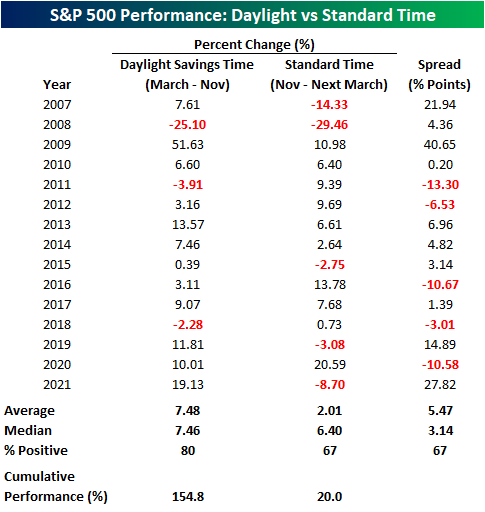