Futures had been drifting higher this morning, but a ton of economic data was just released and it wasn’t good.  PPI missed on the headline but was stronger than expected at the core.  Retail Sales for December were much weaker than expected, and Jobless Claims also came in considerably higher than expected.  Jobless Claims have now been steadily drifting higher with the four-week moving average reaching its highest level in over a year and leading to the question, have we seen the low in jobless claims?  Read all about overnight events around the world and this morning’s news in today’s Morning Lineup.

With all the strength we have seen in equities so far this year, it’s pretty amazing that there has been practically no movement in the long-end of the Treasury curve, as the 10-year yield remains below 2.7% this morning.  With little changes in long-term rates, the yield curve (the spread between the yield on the 10-year and 3-month US Treasuries) remains below 30 basis points and is actually flatter now than it was at the end of December.  As we have repeatedly mentioned in the past, though, flat yield curves aren’t necessarily a bad thing for US equity prices or a negative signal for the economy.  It isn’t until the curve inverts (and then starts to re-steepen) that you have to start raising your guard. 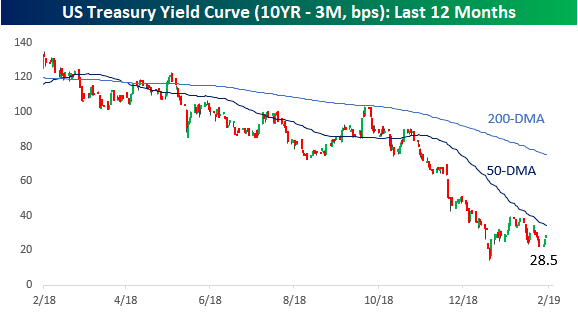