Morning Lineup – Trade Not the Only Headline Weighing on Stocks

It’s not just US-China trade headlines weighing on global equities this morning.   Equities in Europe are trading lower after Factory Orders in Germany showed a much lower than expected increase in March (0.6% vs 1.4%).  Along with that weak report, the European Commission just released economic forecasts and lowered 2019 GDP growth forecasts for the region from 1.3% down to 1.2% and said risks from global trade tensions and Brexit remain ‘pronounced’.  Not to be left out of the discussion, the Federal Reserve issued its May 2019 Financial Stability Report which included the warning that “elevated valuation pressures are signaled by asset prices that are high relative to economic fundamentals or historical norms.”

Even the flow of earnings reports hasn’t been anything special in the last 15 hours.  Since the close on Monday, 155 companies have reported earnings and of those, only 61% have exceeded EPS forecasts, while a slightly lower percentage (59%) managed to exceed topline revenue estimates.

Along with the general rebound in equities across the board, small caps managed to finish the day slightly in the green yesterday as the Russell 2000 closed at its highest level since 10/9/18.  Yesterday’s strength served as a follow-through to Friday’s breakout above resistance where the Russell finally managed to break above a level that has repeatedly acted as resistance over the last six months. 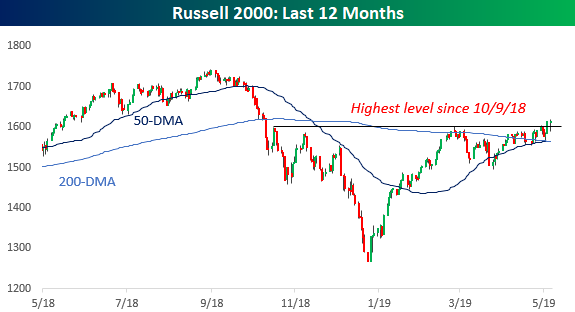 In addition to positive price action in small caps, breadth has been holding up well too.  While not yet at a new high, last Friday, the Russell 2000’s cumulative A/D line reached its highest level since September 21st.  Unlike the S&P 500, though, the peak breadth reading for the Russell was at the end of last August.  Still, as evidenced by the recently widening gap between the two lines below, breadth has been increasingly outpacing price in the Russell 2000 for the last two months. 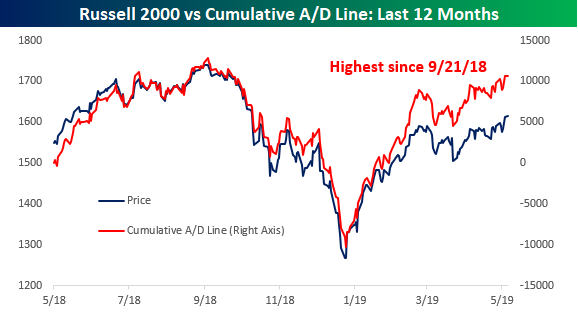