While the US has been facing its own concerns regarding the state of the economy, there is widespread agreement that conditions are better here than other areas of the world.  The latest indication this morning comes out of Europe as ECB President Mario Draghi suggested that “in the absence of improvement…additional stimulus will be required.”  It’s great that the US economy is doing relatively well, but it has resulted in central banks around the world taking an easier stance towards monetary policy as the FOMC’s last move was a rate hike.  The President is getting tired of all this winning and this morning vented his frustration again on Twitter, saying the latest comments from Draghi were “unfair to U.S.”

Please read today’s Morning Lineup for a recap of Draghi’s comments, the latest inflation data out of Europe, and housing data out of Australia.

Markets will face a big test tomorrow as the Fed will announce its latest policy move on interest rates.  While it is likely no change to rates is made at the meeting, the market is obviously waiting for clarity as to what will happen going forward.  Will the Fed move towards the market and the President (more cuts), or will it try to jawbone the markets closer to its view (fewer cuts)?  That’s the big question, and while there is the potential for a volatile market reaction, the VIX is moving to multi-week lows ahead of the meeting.  Just this morning, it dropped back below 15 and is now back below its 50-DMA for the first time since early May. 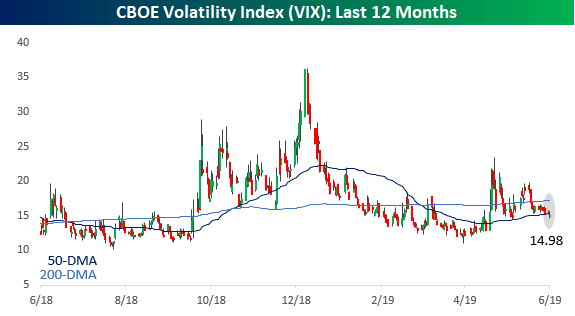