Morning Lineup – Three in a Row?

It wasn’t looking that way early yesterday afternoon, but with two positive days in the books and futures pointing to a higher open today, the S&P 500 could have its first three-day winning streak since the end of November.  The fact that asset allocators are being forced to buy equities to get their portfolios back into balance with their benchmark weightings could add further fuel to the fire.  After all, we saw the same trend play out in the last few days of October and November as well.  Then again, nothing is guaranteed in this market lately, and the difference between a big up day or down day is simply the timing of when the last buy or sell program of the day hits, sending stocks careening in one direction or the other.

Yesterday’s reversal which followed a big up gain the day before certainly has helped to provide a boost to sentiment, but as we mentioned in yesterday’s commentary, while the type of action we have seen in the last couple of days has ultimately led to better than average returns over the following year, in the short-term, there was usually more downside.

Take yesterday’s reversal in the Nasdaq.  After trading down over 3% intraday, the late-day rally in the Nasdaq to finish in positive territory was just the 20th time since 1985 that the index was down at least 3% intraday and finished in positive territory.  Of the 19 prior occurrences, 18 of them occurred either between 2000 and 2002 or in 2008.  Chasing those rallies didn’t turn out particularly well. 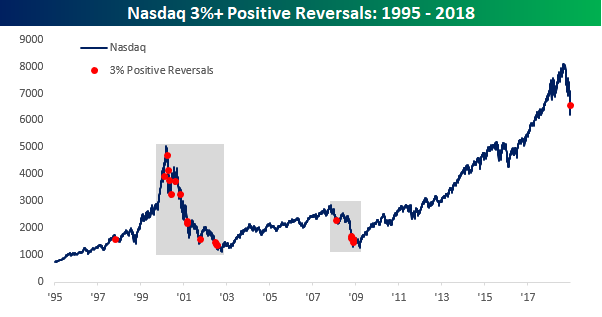