Morning Lineup – Three in a Row?

After a shaky start to the trading month on Monday, equities have seen solid gains over the last two trading days and are on track for a third straight day of positive returns today. Treasuries are also continuing their strong rally as talks between the US and Mexico over tariffs failed to result in an agreement.  In Europe, the ECB left rates unchanged (as expected) and noted that rates will remain at current levels through at least the first half of 2020.

Economic data just released showed Initial Jobless Claims and Productivity readings that were pretty much right inline with expectations, while Unit Labor Costs came in significantly weaker than expected (-1.6% vs -0.8%).

Please click the link below to read today’s Bespoke Morning Lineup for our take on the latest news driving markets overseas overnight and this morning. 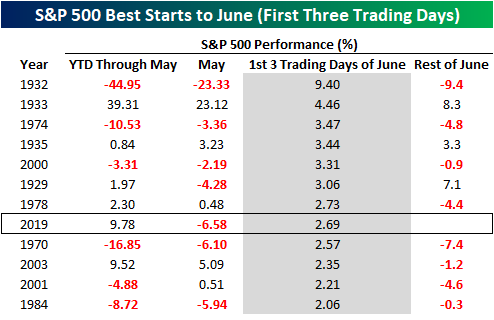