It’s taken until the third trading day of the year, but it looks like the market may finally have its first positive open of the year.  ‘May” is the key word here as we still have to get through the December jobs report coming out shortly.  The key driver behind this morning’s gain, so far, is the move by the PBoC to cuts the reserve requirement by 100 basis points.  Over in Europe, inflation date came in weaker than expected while PMIs for the services sector were mixed.  Read today’s Bespoke Morning Lineup below for major macro and stock-specific news events, updated market internals, and commentary.

Now that the S&P 500 is down 2.35% just two trading days into the year, the US equity market is off to its worst two-day start since 2000.  It is also just the sixth time in the index’s history that it has seen a decline of 2% or more in the first two trading days of the year.  In other words, it’s not often that it gets worse than this!  Look on the bright side, though, we could only be down 1.35%! 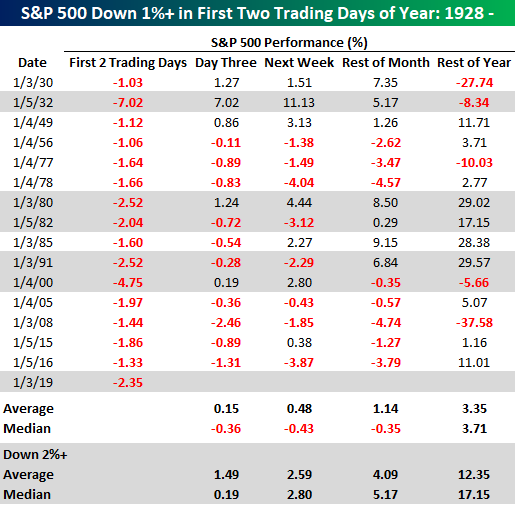