Morning Lineup – That Color You See is Called Green

Futures were already higher on little more than equities being sharply oversold and treasuries being extremely overbought, so we were due for at least a short-term bounce.  The positive momentum has been aided by some dovish comments from Chicago Fed President Evans just now and somewhat conciliatory language from the Chinese regarding trade.  There’s a lot more Fed commentary on the schedule for today, though, so they will likely send a message to the market either way.  Either the market has it entirely wrong pricing in multiple cuts over the next several months, or they will signal they are coming around to the market’s view.

Please click the link below to read today’s Bespoke Morning Lineup for more of our recap of this morning’s market performance overseas as well as our view that stocks don’t have to plunge if the Fed doesn’t cut rates as aggressively as the market is pricing in.

Markets appear to be on pace to unwind much of the moves we saw yesterday, but we would be remiss not to point out the drubbing that the high yield market has seen in recent days. As shown in the chart below, high yield spreads (plotted on an inverse basis in the chart below) have widened out to their highest levels since early January.  In just the last two days alone, spreads have widened out by more than 35 basis points, which is the biggest two-day move since December. 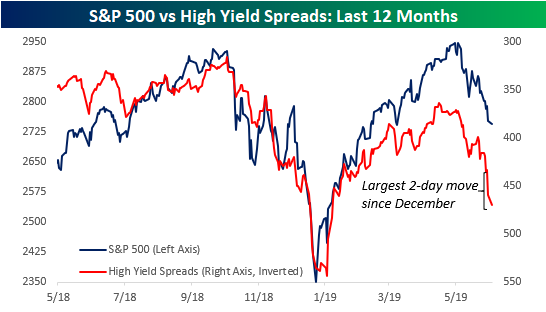