Morning Lineup – Tap. Tap. Tap. Is this Thing On?

Trading desks are sparsely staffed this morning, and if you are reading this either at the office or on your way to work, we feel your pain.  Questions we ponder on a day like today are why is the day before July 4th a shortened session, but the Friday after isn’t?

Anyways, the big June payrolls report is right on tap and should go a long way in letting us know if the futures markets have been correct in anticipating at least a 25 bps rate cut at the end of July.

In other news…it’s a summer Friday sandwiched between a holiday on one side and the weekend on another.  There really isn’t much.

Read today’s Morning Lineup to get caught up on news and stock specific events ahead of the trading day and everything you may have missed since Wednesday’s close.

Believe it or not, today is only the 6th time in the last 45 years that July 5th has fallen on a Friday, but like today, each of the prior Friday, July 5ths also featured Non-Farm Payrolls (NFP) reports.  In the two charts below, we have grouped the five prior events (1985, 1991, 1996, 2002, and 2013) based on whether the reported Non-Farm Payrolls reading that day was better or worse than expected.

Overall, market performance has generally been positive on these five days as the S&P 500 has seen an average gain of 0.65% with positive returns four out of five times, and on two of the five days, equities closed early on the day. 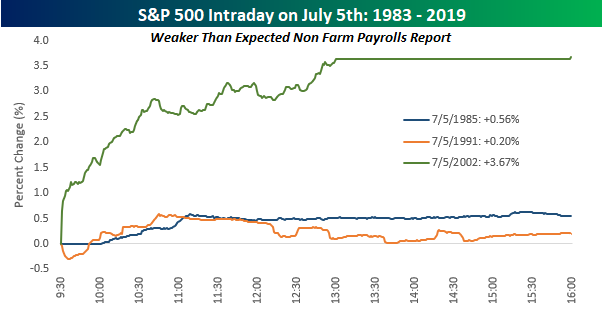 On the two days where NFP were better than expected, returns weren’t as positive.  In 2013, the S&P 500 rose 1.02% when NFP came in ahead of forecasts, but in 1996, when the unemployment rate fell a surprising 0.3% percentage points and hourly wages saw their largest m/m percentage increase in 13 years, investors were spooked that the strength would lead to more hawkish rate policy from the FOMC.  While a strong report of that magnitude is pretty much out of the question today, a significant beat relative to expectations is unlikely to be met with a positive reaction from the market. 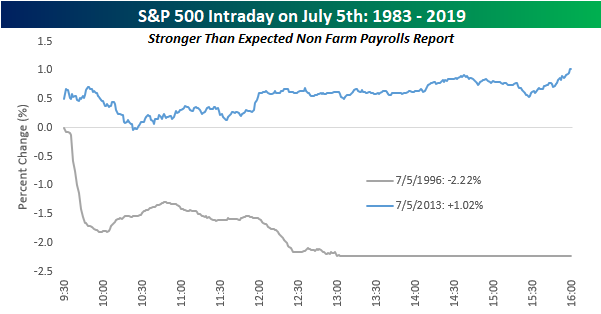