After a big surge yesterday, shares of Qualcomm (QCOM) are still finding an equilibrium in the wake of yesterday’s settlement with Apple (AAPL).  After a bunch of upgrades this morning, the stock is up another 11%.  Yesterday’s news between the two companies also gave Intel (INTC) an opportunity to exit the smartphone modem business (AAPL was its primary customer), which was considered an inferior offering to QCOM’s.  With that news, INTC’s stock is rallying close to 5% as the knock-on effects of this major deal (details of which are scant) continue to shake out.

In earnings news this morning, the picture isn’t quite as pretty as it was yesterday.  Of the thirteen companies that have reported so far today, just 62% have exceeded EPS forecasts while slightly more than half (7) have managed to exceed top line results.

We have a lot to get to in this morning’s report, but below we wanted to highlight one interesting aspect in terms of where global equity markets stand now compared to three months ago.  If you haven’t looked at equity index charts from around the world recently, it may surprise you to know that as of yesterday’s close no less than seven major national indices are within 1.5% of new 52 week highs on a closing basis with India and China marking their best closes of the past year. Another 7 major country indices are within 6% of that level, and only one (Malaysia’s Bursa Malaysia Index) is more than 11% below 52-week closing highs.

In the left chart below, we show distance from 52-week closing and intraday highs for the global markets covered in our Global Macro Dashboard. What a change it’s been over the last three months. In the second chart at right below, we show the same metrics as-of three months ago. Only 2 indices were within 6% of 52-week highs at that point, and seven were at least 15% below their best levels of the year prior.  The risk asset rally since the end of December has lifted a lot of ships. With this kind of backdrop, one would think central banks around the world would be more biased towards tightening than cutting!  For an updated set of charts and other metrics covering each of the countries below, make sure to check out our weekly Global Macro Dashboard. 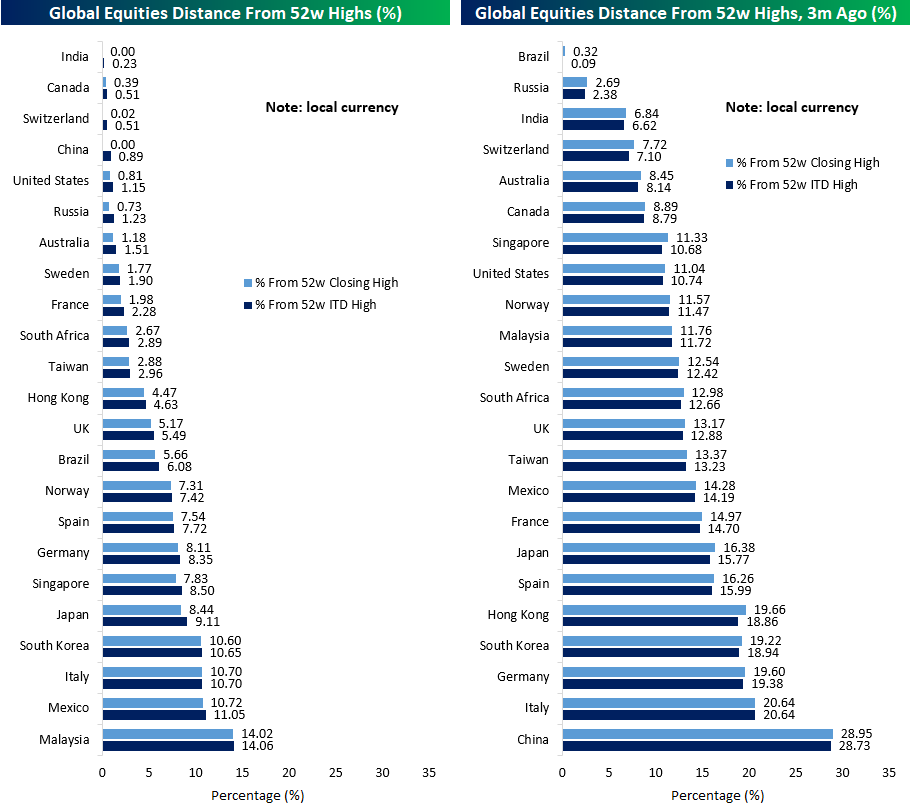