After five straight months of declines from an all-time high back in August, it appears as though small business sentiment has gotten back on track.  This morning’s release of the NFIB Index of Small Business Sentiment showed a larger than expected increase as the headline index came in at a level of 105.0 compared to estimates for a reading of 102.0.  While the index is still off its record high of 108.8 from last August, it has risen for four straight months now, which is tied for the longest streak of increases since the four months that followed the 2016 election.

In other news, foreign equity markets are in rally mode once again despite relatively weak economic readings.  In the US, PPI will be released shortly, but as the President already tweeted, “The United States has VERY LOW INFLATION, a beautiful thing!” Please read today’s Morning Lineup for our latest take on events from overnight and this morning.

As markets have started to recover, the yield curve is still inverted (as it has been for the last three weeks), but it has become less so over the last six trading days. As shown in the chart below, the curve has steepened from a low of negative 25 bps on June 3rd to 9 bps this morning. That’s the largest six-day steepening since October. 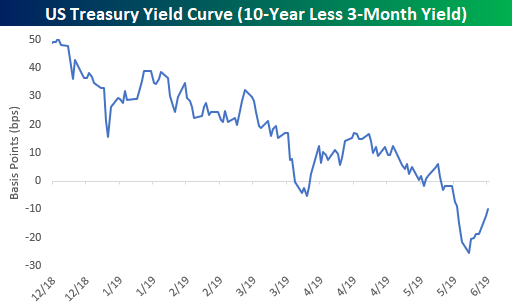