Deal or no deal?  That is the question for today as Congressional negotiators have apparently reached an agreement on averting a government shutdown.  Now the only question is whether or not the President will go along with it.  We’ll be on the lookout for the tweet!  US equity futures are trading higher on the news, and while yesterday’s last hour did not see a big rally, it was the eighth straight day of gains in the final 60 minutes of trading!  Read all about overnight events and this morning’s news in today’s Morning Lineup.

Small business optimism came in significantly weaker than expected today falling from 104.4 down to 101.2.  That 3.2 point decline was the largest m/m drop since June 2015.  While a big drop is concerning, the temporary factor of the government shutdown probably played a large role.  Also, looking at a long-term chart, peaks in the NFIB index haven’t exactly been the best timing indicators of a recession. 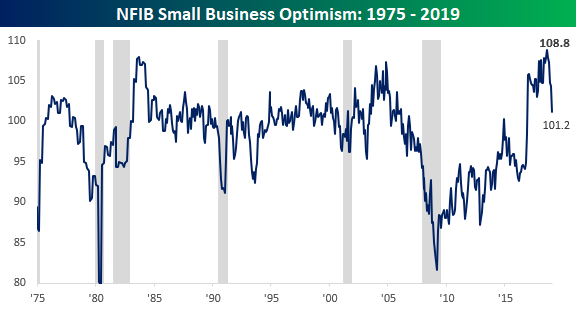 On a shorter-term basis, though, the recent declines in the NFIB optimism index are notable in the fact that this month’s reading is now the lowest since November 2016.  In other words, nearly all of the boost in small business sentiment since the 2016 election has worn off. That right there is probably the number one reason the shutdown ended in late January! 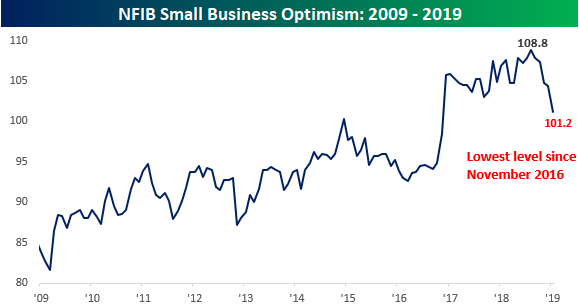