In a post on Wednesday, we highlighted the important juncture the semiconductor space was at, and unfortunately, the group didn’t take the bullish route.  After failing to break out above resistance, last night’s earnings report from Broadcom (AVGO) dashed any hopes for the sector ending the week on a positive note and above resistance.  The group is poised to open lower by close to 3% this morning as AVGO dampened the outlook for a second-half turnaround.  Retail Sales, which haven’t exactly inspired confidence lately, actually came in relatively well, and Industrial Production and Capacity Utilization will be released later on.  Please read today’s Morning Lineup for further analysis on AVGO’s earnings and the semis in general as well as a recap of some important overnight economic data in China.

Today’s decline in the semi ETF (SMH) will mark the 16th downside opening gap of more than 2.5% for the group over the last five years.  Below we list each of those prior occurrences along with how SMH performed from the open to close.  Overall, SMH has seen an average open to close gain of 0.76% (median 1.73%) following these downside gaps with gains 60% of the time.  For each day, we also list the opening gap of SPY to show if the downside move in SMH was market-related or more specific to semis (like today’s move).  As shown, the only time SMH gapped down this much or more while the S&P 500 saw a smaller downside gap was in October 2014. 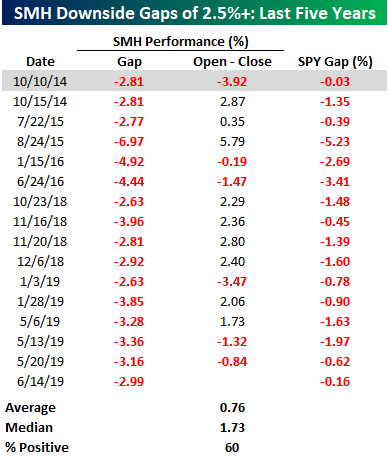