Morning Lineup – Rising Tide on Both Sides of the Atlantic

It is a very positive tone for European equities and US futures this morning as the S&P 500 is indicated to open up half of one percent as it continues to follow through from Friday’s close above resistance.  There’s not a lot of economic data to speak of today, but the FOMC is set to begin a two-day meeting.  With virtually zero chance of a hike or even a cut in rates at this meeting or in the next few, they may have trouble finding things to talk about for the next two days!

With the S&P 500 down just over 3% from its all-time high and tomorrow marking the six-month anniversary since the last time the index closed at an all-time high, the current period is just the fifth time since the March 2009 low that the index has gone six months or more without closing at post-financial crisis high.  It also marks just the sixth time that the index has gone more than 100 trading days without hitting a new high.

In the chart below, we highlight the S&P 500’s path since the March 2009 lows and show each of the 100+ trading day droughts without a new high in red.  The current period, which will extend to 122 trading days today, has been unique as it came just 19 trading days after a 145 trading day drought that spanned late January to August of 2018.  When the S&P 500 finally broke out to new highs last August, bulls were probably not expecting such a ‘lame’ breakout as the difference between the September high and the high from earlier in January was barely more than 2%.  The only period that was similar was from 2011 through 2012 where a 206 trading day streak without a new high and a 108-day streak were separated by just 22 trading days and a rally of less than 4%. 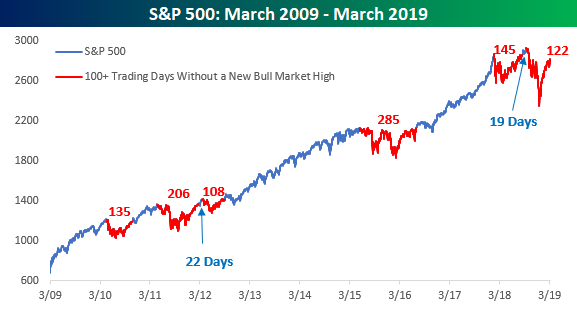