Morning Lineup – Picking Up Where Yesterday’s Close Left Off

Solid earnings news from companies like IBM, UTX, and PG are putting traders in a buying mood this morning sending futures up by about 0.40%. Read today’s Bespoke Morning Lineup below for major macro and stock-specific news events, updated market internals, and commentary.

Even after yesterday’s last hour rally of 0.60%, the S&P 500 still managed to finish down over 1% on the day.  What makes yesterday’s decline unique, though, is that it came as volume was below average.  In other words, there was hardly a rush for the exits.  For example, volume in SPY was 13% below its 50-day average, coming in at under 110 million shares.  The last time the S&P 500 was down 1%+ and volume was more than 10% below average was almost a year ago in late February 2018.  Between then and now, there have been 28 other days where the S&P 500 was down over 1% where volume was higher relative to its 50-day average.

The chart below shows the performance of SPY over the last 15 years, and the red dots indicate each time where the S&P 500 dropped more than 1% on volume that was at least 10% below average.  As shown, there haven’t been many of them in recent history.  Before the last occurrence in February 2018, you have to go all the way back to early 2016 to find the next most recent occurrences.  Before that, there were many occurrences during the financial crisis and the first several years of the bull market, but they were a lot more frequent as the market was rallying than they were during the downturn. 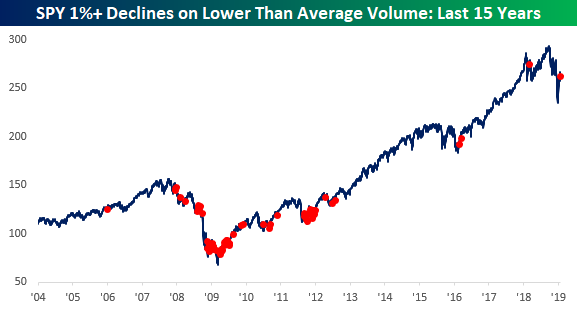