Morning Lineup – Optimism on Trade and a Truce in DC

Lawmakers in DC have reportedly come to an agreement on keeping the government open, and the President has agreed to go along with it.  Can you believe it?? Elsewhere overnight, there is some optimism on US-China trade talks, while economic data in Europe continues to stink up the joint. Read all about overnight events and this morning’s news in today’s Morning Lineup.

Yesterday was a pretty momentous day for the stock market.  Not only did the S&P 500 close back above its 200-DMA (barely), but the percentage of stocks hitting new highs also reached its highest point since December 3rd, before the big whoosh lower.  With the rally, though, the percentage of stocks that are short-term overbought has reached its highest level since January 26th of last year.  That by no means suggests we are due for a repeat of what happened following that last reading, but does indicate that short-term technicals are getting a bit stretched and that the market may need to pause and catch its breath. 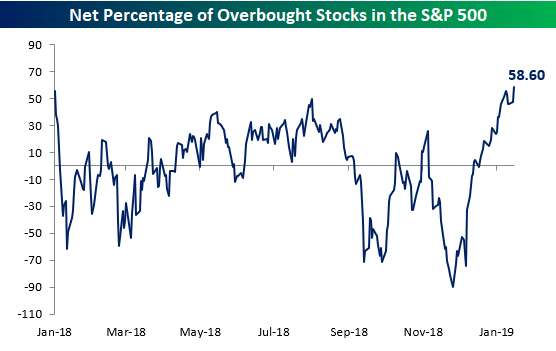