Welcome to what has historically been the start of the toughest six month period for US equity markets.  While the May through October period may not be the market’s best time of year, it is starting off on a positive note as all of the major averages are pointing to higher opens.  The driver of this morning’s strength isn’t any sort of positive sentiment coming out of Asia or Europe, because those markets are all closed for the day.  No, the key today is earnings.  In yesterday’s note, we said it’s not all about Alphabet (GOOGL), and we’re seeing that play out again today as more than 65% of the nearly 200 companies that have reported since yesterday’s close exceeded EPS forecasts and a very impressive 63% beat revenue forecasts!

With another month of positive returns in the books, we wanted to provide a quick update on how the S&P 500’s current performance over the short and long-term stacks up to historical averages.  Current annualized returns for the S&P 500 over the last one, two, five, and ten years are all above the historical average.  The only time window where returns have been subpar is over the last twenty years where the 6.0% annualized gain is well below the long-term average of 11.0%.  Keep in mind, though, that this is a period that encompasses two bear markets where the S&P 500 lost half of its value. 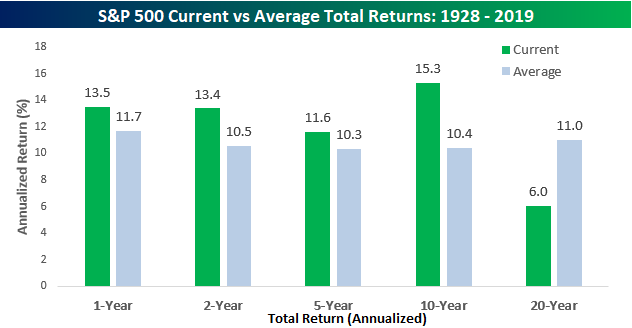 In terms of where the current one, two, five, ten, and twenty year returns stack up in percentile terms, for the most part, they aren’t terribly stretched.  For the one, two, and five year periods, returns are all less than the 60th percentile, while 20-year returns are only in the 4th percentile.  Again, the only period that is elevated is the ten-year time frame where the S&P 500’s annualized return is better than three-quarters of all other ten-year windows. 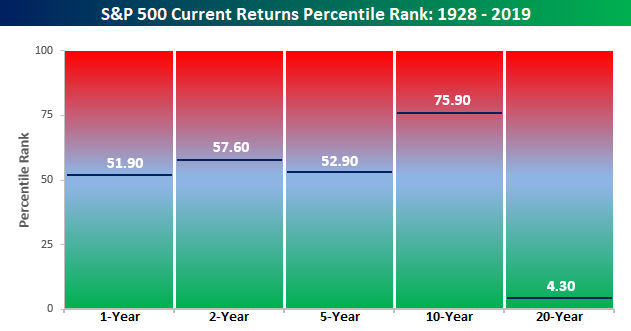