We’ve just published today’s Morning Lineup featuring all the news and market indicators you need to know ahead of the trading day.  To view the full Morning Lineup, start a two-week free trial to Bespoke Premium.  Below is an excerpt:

The weekend’s release of the Mueller Report did not have the kind of fireworks that some were looking for but that markets can’t stand.  From a political perspective, we’re probably far from the end of hearing about Russia, the elections, and any obstruction, but based on the market’s complete lack of any reaction this morning, it has already moved on.

Markets will also be trying to move on from Friday’s sharp declines after the yield curve (10y/3m) inverted for the first time in over a decade, and with the curve back in positive territory this morning, that should help stabilize things for now.  Don’t forget, though, that there are just six days left in the quarter, and shortly after that Q1 earnings season kicks off, so that should be, at a very minimum, an interesting period for equities.

Following in the heels of Friday’s sharp declines, Asian equities were hit hard overnight.  For China, that meant that its streak of 1% gains to kick off the week ended at six.  That was still enough to be the longest such streak of 1%+ gains in over a decade. 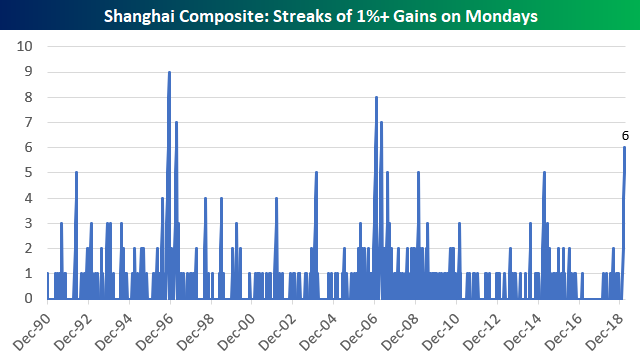 From a technical perspective, China’s rally is still intact.  While the Shanghai Composite has been consolidating gains over the last two to three weeks, the short-term uptrend that has been in place since it broke out in late February remains intact. 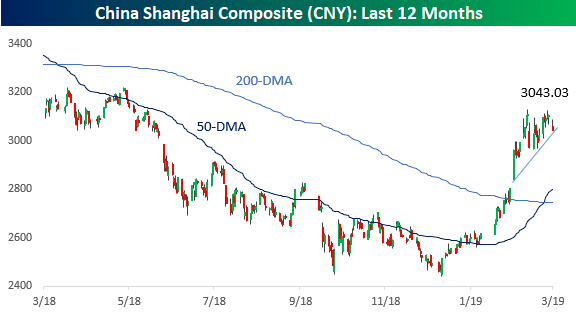