The back and forth action of the market lately in response to trade headlines related to China is really getting tiresome.  Today, the narrative is negative as futures have been trending lower all night and into this morning.  While we’ve seen a small bounce since 6:00 AM NY time (when things started to head south yesterday) we’re still deep in hole relative to yesterday’s close.  Jobless Claims were just released and came in slightly lower than expected (211K vs 215K).

Be sure to check out today’s report for a recap of all the US and major European earnings reports overnight, the latest releases of flash PMIs for May, and some European data that was actually positive.  How about that!

We mentioned that the constant whipping around of the markets has become tiresome.  To illustrate just how much US equities have been getting tossed around lately based on overnight headlines, the chart below shows the 20-trading day average of the opening gap for the S&P 500 ETF (SPY).  Including today’s weakness, over the last 20 trading days, SPY has averaged an opening gap to the downside of 0.36%. As shown in the chart, this hasn’t happened too often in the period since the financial crisis.  In fact, the last time it occurred was in August 2015 (China issues again) and before that 2011 (US debt downgrade)! 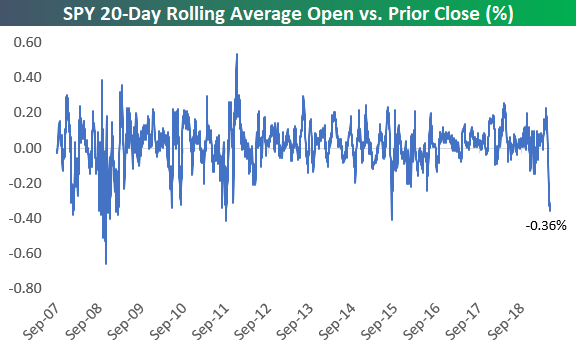 While the S&P 500’s opening print has tended to be extremely weak over the last four weeks, investors have spent most of the trading day buying the weakness.  As shown in the chart below, the S&P 500’s average change from the open to close has been a gain of 0.22%.  That hasn’t been enough to erase the opening losses, but it has managed to keep the market’s declines in check. 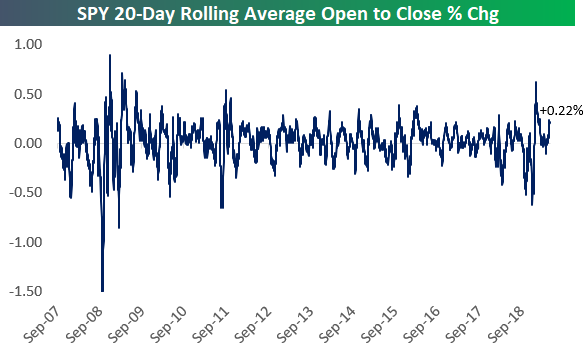