100 companies have reported earnings so far this morning, in what is the busiest day of earnings for the reporting period.  This also comes on the heels of a busy after-hours session on Wednesday where Microsoft surged and saw its market cap exceed $1 trillion.  Facebook (FB) also reported a strong quarter pushing that stock close to $200 per share.  This morning, the mood is not as positive as a big earnings miss from 3M (MMM) has that stock trading down over 8% and taking the DJIA futures down with it.  In economic data, South Korea reported a surprise contraction in GDP overnight (weakest in ten years).

If you are looking for a real-world example of how tax policy can impact the economy, look no further than the Hamptons area of Long Island.  With last year’s GOP tax overhaul capping deductions for mortgage interest and property taxes, sales of second homes have been hit hard.  According to a Bloomberg article this morning, the number of Hamptons luxury houses with “For Sale” signs in front of them swelled to 869 at the end of the first quarter.  That’s nearly triple the number that were listed for sale at the same time last year and is the highest level in at least seven years.  While inventories of luxury homes in the Hamptons are ballooning, sales are falling off a cliff as Q1 sales in the region were the lowest for the first three months of the year in at least seven years!

Based on the trends of rising inventories and slowing sales, the article goes on to say that at the current pace it would take 7.5 years to sell the available inventory of luxury homes- another record.  The article went on to quote the President of one firm as saying that the market is in a period of ‘transition’.  That would be putting it mildly! 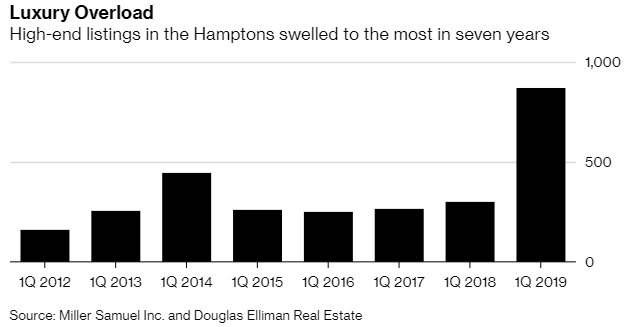