The phrase of the day around the world heading into 8:30 was weak economic data, as a bevy of weaker than expected economic data points flooded the headlines.  The just-released November Retail Sales report, however, tried to buck that trend as it not only came in higher than expected, but last month’s report was also revised higher!  There’s still more to come, though, with Industrial Production and Capacity Utilization at 9:15 and Flash PMI from Markit at 9:45, so hopefully that trend can continue (but not too strong!).  Read today’s Bespoke Morning Lineup below for major macro and stock-specific news events, updated market internals, and detailed analysis and commentary:

Back in late September when the S&P 500 peaked and started to correct, growth stocks were hit hard reversing their trend of outperformance from earlier in the year.  The culprit? Concerns over tighter FOMC policy.  By mid-November, the S&P 500 Growth Index had given up about half of its YTD outperformance relative to the S&P 500 Value since the start of the year.  Over the last three to four weeks, though, growth stocks have regained some steam with a strong three weeks of relative outperformance.  This latest leg lower for the group has come as concerns over broader economic growth have increased causing the market to rethink expectations for the pace of rate hikes going forward. 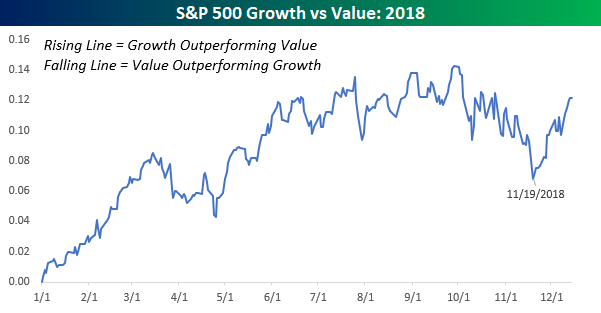