With the S&P 500 closing just above its former record high yesterday, one would think the last seven months have been nothing more than running on a treadmill for the stock market.  A look deeper, though, shows that there has been no shortage of big winners (and losers) in terms of industries.

The table below shows the ten best and worst performing S&P 500 industries since the S&P 500’s 2018 closing high on 9/20.  Eight of the biggest winners are all up over 10%, including one – Power & Renewable Electricity- which is up over 20%.  Who would have thought that an industry from the Utilities sector would have led the market? Outside of Utilities, Technology has been a big contributor to the market’s strength with three industries in the top ten (Communications Equipment, Software, and Semis).  Another surprising sector with representation on the list is Consumer Staples.  Both the Personal Products and Household Products industries are up 14.8% since the S&P 500’s 2018 high.

On the downside, Energy has been a drag as Energy Equipment and Services has dropped over 23% since 9/20 while Oil, Gas & Fuels is down 6%.  One would think that with oil prices so high, that this group would have done better, but no such luck.  Two groups that have felt the pinch from higher energy prices (and other issues like the 737) are Airlines and Air Freight. Both of these industries from the Industrials sector are down close to 10%. 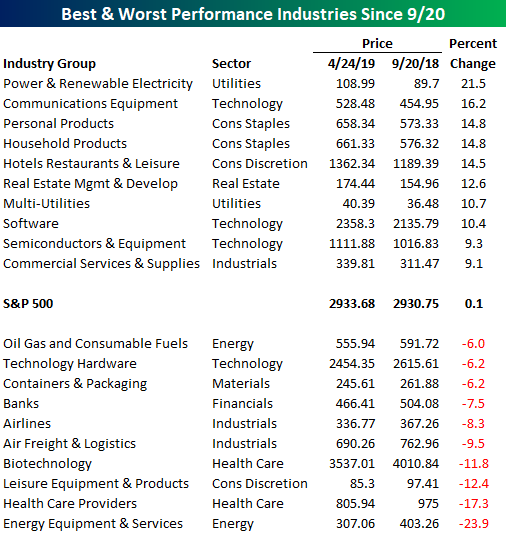