With markets around the world all open following a holiday on Monday for many, the mood is mixed although US futures are right near their highs of the morning.  The catalyst in the US is solid earnings reports.  Of the nearly 50 names that have reported so far this morning, two-thirds have exceeded EPS forecasts.  More impressive, however, is the fact that two-thirds of those companies reporting have also exceeded top-line revenue estimates.  It’s only one morning’s worth of data, but it is also the busiest day of earnings so far this reporting period.

Here’s an interesting chart to start your day:

As earnings season has come to life, gold has completely flat-lined in the last few trading days.  Take a look at the chart below which shows the YTD performance of the SPDR Gold Trust ETF (GLD).  Over the last four trading days, the spread between the intraday high and low over that period has been just 0.40%.  While that narrow a spread is notable enough, its the third time this year that GLD has gone into one of these four-day nap periods where the spread between the intraday high and low was less than 1%!  Like the last two, will this one be another pause that refreshes? 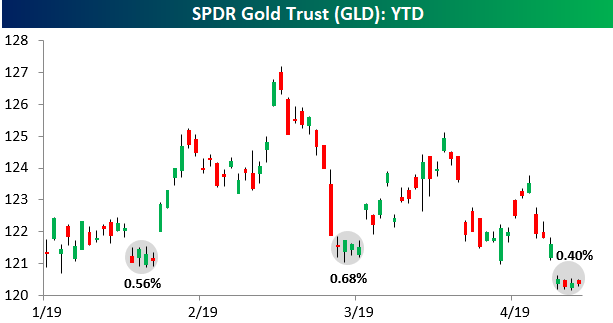 What’s even more notable about the recent narrow range for GLD is that since the ETF started trading in 2005, there has never been a four-day period where the spread between the intraday high and low over those four days has been narrower.  Volatility isn’t just lower in the equity market as gold has become increasingly less volatile in recent years. 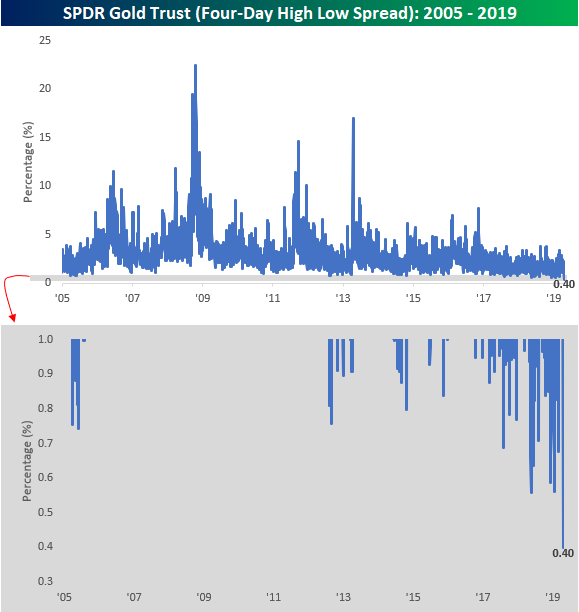