Dow futures are under a bit of pressure this morning due to weakness in Boeing (BA), which is trading down nearly 3%.  S&P 500 and Nasdaq futures, meanwhile, are both indicating a positive open although they too are off the highs of the overnight session.  The more optimistic tone earlier was due to some positive headlines regarding this weekend’s meeting between President Trump and President Xi, but some of the air was let out of the balloon following a less optimistic tone from the WSJ.

Please read today’s Morning Lineup to get caught up on everything you need to know ahead of the new trading day including the latest news on trade, Sentiment among Korean businesses and in the EU, as well as the latest on the Brexit saga.

Semis have been one of the most negatively impacted groups from all of the trade disputes between the US and China, but yesterday the group got a reprieve on the back of Micron’s (MU) big 13%+ gain.  Overall, the Philadelphia Semiconductor Index (SOX) rallied over 3%, and while the S&P 500 sold off in the afternoon, semis managed to hold up much better.  In fact, all 30 stocks in the SOX traded higher yesterday, which was the fourth time this month that we have seen every stock in the index trade higher on the same day.

While there have now been four days this month where every stock in the SOX traded higher on the day, there hasn’t been a single day where every stock traded lower.  Going back to 2009, this is only the second month where we have seen a net of at least four days where breadth in the SOX was 100% positive.  The one other month was back in July 2009 in the early stages of the bull market. Conversely, there has only been one month in the last ten years where there was a net of four days where every stock in the SOX traded down on four separate days in the same month.  That month was March 2018 when the index also saw its high for 2018. 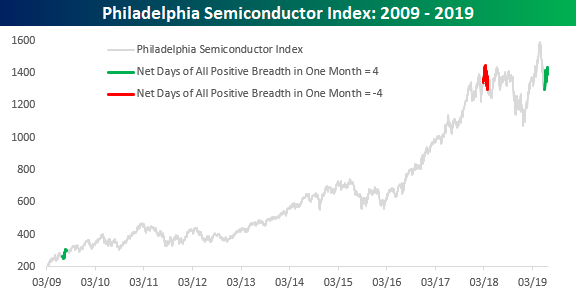