Morning Lineup – China on the Offensive

US futures have been weakening all morning continuing a trend that has for the most part been in place all night.  Besides the usual back and forth rhetoric between the US and China over trade (this time China threatening to limit exports of rare earth metals to the US), weak data out of Europe, falling Treasury yields, and cratering oil prices aren’t helping sentiment as we head into the opening bell.

Make sure to check out today’s Morning Lineup for a recap of overnight earnings news, weak confidence data out of South Korea, the surge in German jobless claims, and other market-moving economic data out of Europe.

Yesterday marked the first time this year that the S&P 500 was up over 0.5% at some point intraday and then sold off to finish the day down by over 0.75%.  This is notable for two reasons.  First, it just goes to show how strong the equity market has been so far this year.  For nearly the first five full months of the year intraday sell-offs of any discernible magnitude had been nearly non-existent during normal trading hours.  Just as important, it suggests that the corrective phase the market has been in since early 2018 remains alive and well.

The chart below shows the S&P 500’s performance over the last five years and in it we have included red dots to show every day during this period that the S&P 500 was up 0.5% at some point intraday only to give it all back and more, finishing the day down at least 0.75%.  All of the days fitting these criteria have been clustered into two periods.  Of the now 19 occurrences since the start of 2014, the first ten were all clustered around a 15 month period spanning December 2014 through February 2016.  Then from March 2016 right up through the last day of February 2018 there wasn’t a single occurrence.  Since that drought ended, though, we’ve now seen nine occurrences over a similar 15-month span. 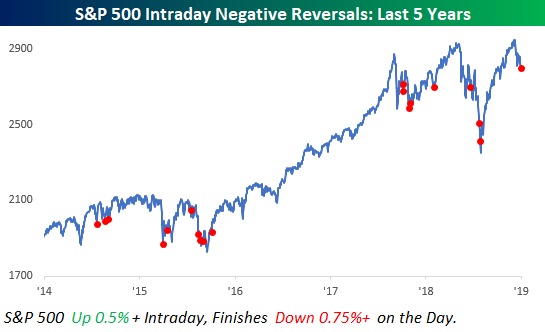