What happened in December?  Between the delayed December Retail Sales report released earlier this month and this morning’s report on Housing Starts, either the economy hit a cliff or whoever was responsible for tabulating the data while the Federal government was shutdown needs to brush up on their calculations.  Today’s report on Housing Starts came in at SAAR of 1.078 million, which was 178K below the consensus forecast of 1.256 million.  Looking through our Economic Indicator Database, there has not been that big of a miss in Housing Starts relative to expectations in 12 years!   It wasn’t all bad news, though, Building Permits came in better than expected.  Besides this morning’s already released data, there’s still a lot on the schedule today, so read all about not only them but also overnight events around the world and this morning’s news in today’s Morning Lineup.

Yesterday, we noted the fact that the Shanghai Composite was bumping right up against a very long term downtrend after its 5%+ gain to kick off the week.  Overnight, the index rallied higher in the morning but gave it all back throughout the trading day and closed with a decline of just over half of a percent.  So, we’re going to have to wait at least another day (and likely more) before that downtrend gets taken out.

Another downtrend that’s provided pretty formidable resistance recently is the short-term downtrend in long-term US Treasury yields. At both the 10 and 30 year maturities,  yields just can’t seem to increase the way so many have been calling for.  In the case of the 10-year, yields bounced off the early January lows but quickly ran out of steam just shy of resistance at the 2.8% level, and since then have been trending lower right below the 50-DMA. For the 30-year it’s a similar story as the 50-DMA acts as a ceiling and the current yield of 3.02% is just 14 bps above the low print from early January. 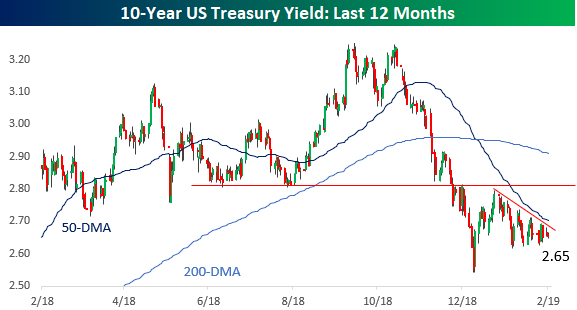 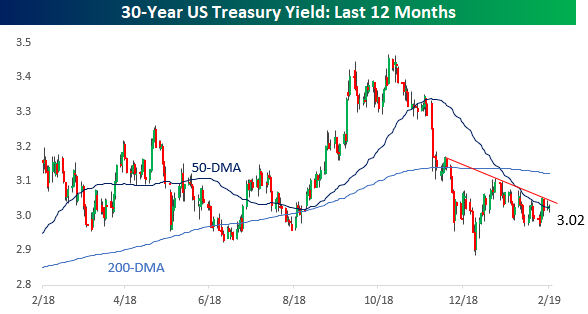