“Marlboro Friday” refers to a day back in 1993 when Philip Morris announced drastic cuts in cigarette prices in order to better compete with the cheaper prices being offered by generic makers.  As a result of the move, the company’s stock dropped over 25% in a single day.  Fast forwarding a quarter century, today could go down in the annals of history as ‘Biogen Thursday’ as the company announced that it was discontinuing trials for its experimental treatment of Alzheimer’s disease as the initial results have been ineffective.  As a result of Biogen’s announcement, the stock, like Philip Morris back in 1993, is trading down over 25%.  In the case of Philip Morris back in 1993, the stock did a whole lot of nothing for the next six months and took around two-years to get back to its pre-Marlboro Friday levels.  BIIB shareholders are no doubt hoping that a little time will also heal the sting from today’s decline.

In broader market news this morning, the Bloomberg US Dollar Index is attempting to bounce following yesterday’s breakdown in the wake of the FOMC’s dovish tone.  Heading into today, the index was down in eight of the prior nine sessions and just yesterday broke out of its short-term uptrend that had been in place since the FOMC started to pivot dovish late last year/early this year.  Was the FOMC dovish enough this time around to really push the dollar lower? 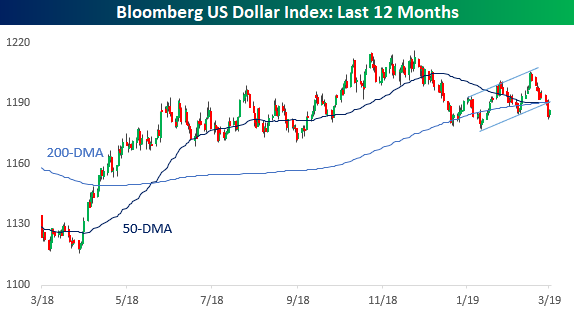