While this will be the busiest week of the earnings season, the pace of reports to start the week has been relatively quiet with just 21 companies reporting so far this morning.  Of those reports, just over 60% have exceeded EPS guidance while slightly more than half have exceeded revenue guidance.  This afternoon, the pace will pick up considerably with close to 60 companies reporting headlined by Alphabet (GOOGL).  In economic data this morning, Personal Income came in weaker than expected at a rate of 0.1% vs estimates for growth of 0.4%, while Personal Spending was higher at 0.9% vs expectations for growth of 0.7%.  Spending more and earning less!  The only other economic indicator of note today is the Dallas Fed Manufacturing report at 10:30 Eastern.

One factor causing Americans to spend more may be the incessant increase of prices at the pump.  Even with crude oil trading lower for a fourth straight day, it hasn’t been enough to counter the seasonal uptick that is normal for gas prices at this time of year. According to AAA, the national average price of a gallon of gas currently stands at $2.89.  The most painful thing for consumers, though, has been that the increase has been constant.  As shown in the chart below, it has now been a record 76 days since the national average price of gasoline last saw a one day decline in a streak that has now dwarfed every prior one since data begins in 2004. 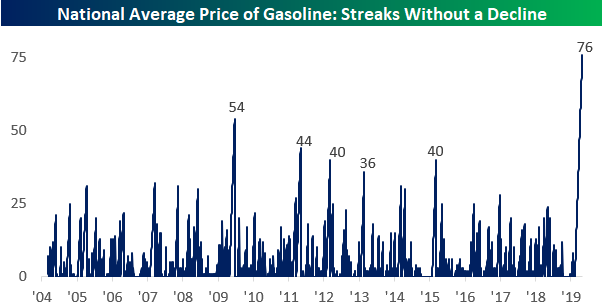