We’ve seen some better than expected economic data out of Europe for a change this morning as PMIs for the Services sector mostly came in better than expected.  US equity futures are pointing to a slightly higher open after yesterday’s weakness.  In Asia, China lowered 2019 GDP growth forecasts and President Trump is threatening to end preferential trade treatment for India and Turkey.  Read all about everything driving the markets in today’s Morning Lineup.

We’ve been discussing the market’s strong breadth so far in 2019 for several weeks now, but today we wanted to provide another illustration of it.  The S&P 500’s 10-Day A/D line typically oscillates between positive and negative territory on what is usually a week to week basis or at least every couple of weeks to weeks.  Lately, though, it has been all positive.  Through yesterday’s close, the 10-Day A/D had been positive for 39 straight trading days. That’s over eight weeks in calendar days!

These kinds of periods of consistent positive breadth don’t typically happen very often. Going back to 1990, there have only been four other periods where the 10-day A/D line was positive for longer than it has been now. 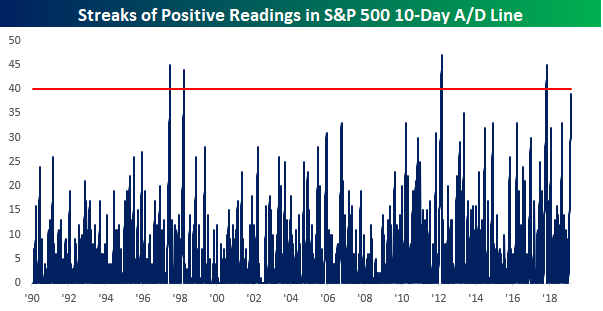