Bespoke’s Morning Lineup – On and Off Again Stimulus Talks

“Never judge a potato by its skin. One day, it will be french fries.” – Ian Wilson

French fries are on our mind this morning due to the fact that one of the only companies reporting earnings is Lamb Weston (LW), which basically produces nothing but french fries and other frozen potato products.  The company just reported results and exceeded EPS forecasts by 31 cents (0.61 vs 0.30) on stronger than expected revenues.  How can you lose with french fries!

In other news this morning, futures have rebounded much of the late day declines towards the end of the day yesterday following additional tweets from the President where he has appeared to restart stimulus talks over Twitter after unilaterally canceling them earlier.  Where this all ends up nobody knows, but the longer this drags on the less likely it is that anything gets done.

From its afternoon high to the close yesterday, the S&P 500 declined more than 2%.  Using our intraday database, we found that there were 62 other trading days since 1982 where the S&P 500 sold off more than 2% between its high in the last 90 minutes of trading and the close.  In the chart of the S&P 500 below, we indicate each of those prior occurrences with a red dot.  While these types of moves were common during the financial crisis, they have also occurred at a number of other more benign periods throughout the market cycle. 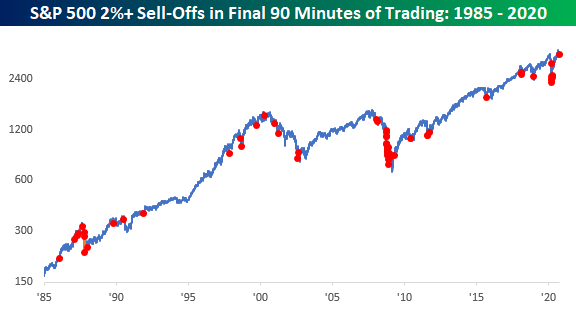