“Be brutally honest about the short term and optimistic and confident about the long term.” – Reed Hastings

We continue to follow closely an emerging trend of “misses” when it comes to companies that have reported earnings so far this season.

In the year leading up to the current earnings season that began last week, our Earnings Explorer shows 8,424 individual quarterly earnings reports.  Of those 8,424 reports, 67% reported EPS that were better than consensus analyst expectations, while 70% reported sales that were better than expected.  So far this season, which began last Monday, we’ve seen just 40% of companies beat consensus EPS estimates and just 34% beat consensus sales expectations.

It’s still very early in the reporting period, but so far it looks like analysts — who were already cutting estimates at a rapid pace leading up to this earnings season — may not have cut forecasts enough.

By the end of next week when another 200+ companies will have reported, we’ll have a much firmer look at where beat rates stand this season.  Below is a look at the rolling 3-month average of beat rates for both EPS and sales throughout the history of our Earnings Explorer.

After COVID hit, beat rates initially skyrocketed as analysts became overly pessimistic, but we’ve seen downside mean reversion in beat rates for the last 18 months or so.  Based on early trends, we could see a return down to the long-term average this quarter, or even a move below average.  Over the last 22 years going back to 2001, 59.4% of stocks reporting have beaten EPS estimates, while 56.45% have beaten revenue estimates.  As mentioned earlier, we’ve seen a 40% beat rate for EPS so far this season and a 34% beat rate for revenues.  We’d note that the only time we saw EPS beat rates fall to the low 50s over a three-month period was in Q1 2009 near the depths of the Financial Crisis lows. 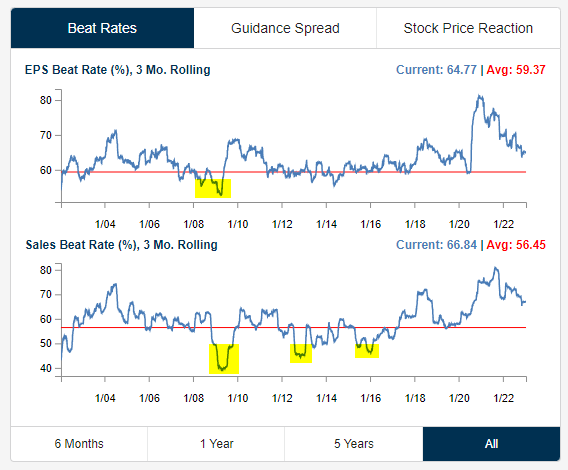