Bespoke’s Morning Lineup – Another Attempt At An Advance

“If you absolutely can’t tolerate critics, then don’t do anything new or interesting.” – Jeff Bezos

The set-up in pre-market futures looks similar today to what it looked like yesterday, but hopefully, the outcome isn’t.  After trading up as much as 1% in early trading yesterday, the Nasdaq quickly gave up all of its gains and more throughout the trading day and finished down more than 1% by the closing bell.  Economic data just released includes jobless claims and the Philly Fed.  Regarding claims, both initial and continuing claims came in significantly higher than forecast, while the Philly Fed actually surprised to the upside even after the big miss from the Empire Manufacturing report earlier this week.

Recent weakness in the market is starting to show up in sentiment surveys, though.  In this week’s survey from AAII, for example, just 21% of respondents reported as bullish while 46.7% were bearish.  In terms of bulls, that’s the lowest reading since July 2020, and for bears it was the highest reading since September 2020.

The Nasdaq made it official yesterday and reached the 10% threshold for a correction.  In the post-global financial crisis (GFC) period, the current period ranks as the 14th correction for the Nasdaq with the most recent before the current one spanning mid-February through early March 2021.  Overall, post-GFC Nasdaq corrections have seen an average total decline of 15.2% over a span of 53 days. The median during this period is a bit milder at 12.0% over the span of just 36 days.  Going all the way back to 1970, the ‘average’ Nasdaq correction has seen a total decline of 19.5% putting them just shy of bear market territory (median: -16.6%) over a span of 75 days (median: 60 days).  At just 10.2%, therefore, the current correction is still more modest than average, but at 61 days its been longer than average for the post-GFC period. 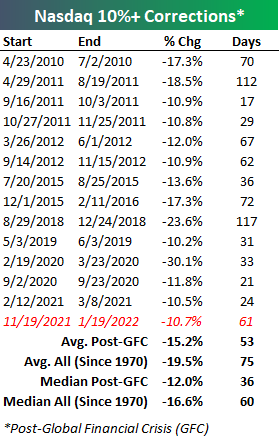