“I believe that, young or old, we have as much to look forward to with confidence and hope as we have to look back on with pride.” – Queen Elizabeth II

After its longest losing streak in years ended earlier this week, the Nasdaq is now on pace for a third straight day of gains and a positive week for stocks.  The last time the Nasdaq was up three days in a row was to close out July.  The catalyst for this morning’s rally appears to be weaker-than-expected inflation data out of China and some weakness in the dollar.  Treasury yields are flat to lower even as crude oil is up over 1%.

While she was queen 15 different prime ministers served under Queen Elizabeth II.  That’s a lot!  Another statistic we found interesting was that during her reign there were also 13 separate bear markets in the US (20%+ declines from a high on a closing basis with no rallies of 20%+ in between), including one where the S&P 500 declined over 50% and another where it dropped over 48%.  Besides those, there were five other bear markets where the S&P 500 lost more than one-third of its value.  In economic terms, there have been eleven confirmed recessions in the US since the Queen was coronated in 1953, and we could be on the verge of a twelfth now.

During each of these economic and market downturns, it probably felt like the end of the world, and you couldn’t have faulted someone for panicking at the moment, but with the benefit of hindsight, each of those periods ended up being nothing more than a bump in the road (some more than others).   During the Queen’s reign, the S&P 500 rallied more than 16,000% or more than 7.6% annualized before even taking dividends into account.  With dividends, the annualized rate of return is over 10%.  US Real GDP per capita over that same period increased by three and a half times rising from $17,093 to $59,288.  With the benefit of all that experience, if you had told the Queen that the economy was contracting or that stocks were on the verge of a bear market, rather than pull her hair out and freak out, instead, in her normally calm demeanor, she would have likely responded with something along the lines of “been there, done that”. 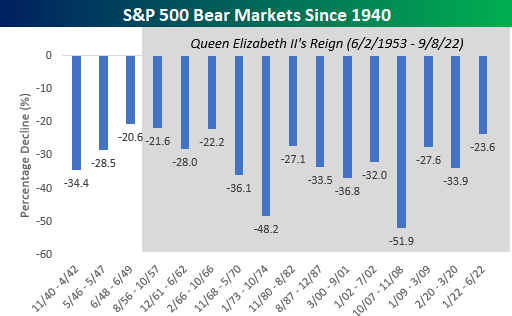