Futures have been trading rangebound around the unchanged line this morning as the ECB rate decision (hiked rates by 75 bps pretty much as expected) and lower-than-expected initial jobless claims have caused a pickup in trading activity generally in a lower direction.  The only other indicator on the calendar in the US is Consumer Credit at 3 PM Eastern.  Besides the data, there are plenty of investor conferences and even some Fedspeak on the calendar, so be on the lookout for tape bombs throughout the day.

New UK PM Liz Truss has announced a number of initiatives to help alleviate stress from surging energy prices. In a more long-term measure, she announced a lift of the ban on fracking and plans to approve more drilling for oil.  In a more short-term-based measure, the new PM also announced a price cap on energy prices for consumers to take effect for the next two years.  That should provide short-term relief, but the quote from Gerald Ford above should serve as a reminder – while prices may be capped, consumers will have to pay for it in some way (either through higher taxes or restrictions on the amount of energy one can use).

Investors have been able to buy and sell long-term US Treasuries via ETFs through the iShares 20+ Year US Treasury ETF (TLT) for just about 20 years now.  In the first few years of the TLT’s existence, volatility in the ETF was what you would expect for a US Treasury – low.  From 2003 through early 2007, the average daily move of TLT over a trailing 200-day period ranged between 0.30% and 0.70%.

Once the housing market crashed and the Financial Crisis set in, volatility in TLT surged with the average daily move breaching 1% on its way to 1.10%.  As markets stabilized in 2009, volatility pulled back but never quite back down to its pre-Financial Crisis range.  Then in 2011, volatility surged again as the US had its long-term credit rating downgraded in August 2011.  Average daily volatility peaked in that period several months later in April 2012 and then began a multi-year decline to a range of around 0.50% per day.

Like everything else in the economy, COVID wreaked havoc on the Treasury market pushing the average daily move in TLT back up above 1%, but the exaggerated volatility was short-lived, and the market quickly returned to more stable levels by June 2021.  The period of calm was just as short-lived, though. As the Fed found religion regarding inflation in late 2021 pushing long-term rates higher, volatility has once again surged.  Just yesterday, the 200-day average daily move in TLT once again topped 1% for the first time since June 2020.  How long this period of heightened volatility lasts remains to be seen, but if rhetoric on the part of Fed officials is to be believed, a return to calm seems a long way off. 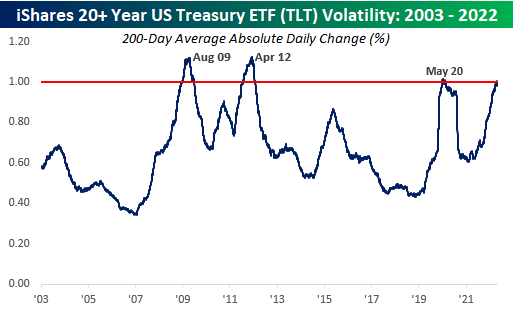