Maybe we needed the weekend to pause and regroup.  At least that’s the hope for the bulls.  Futures are higher this morning after a news-packed Labor Day which saw volatility in Europe following news that Russia would cut off natural gas supplies to that region of the world until sanctions were lifted. Also, yesterday, OPEC+ announced that it would cut supplies by 100,000 barrels per day reversing the token increase from September after President Biden visited Saudi Arabia in the Summer.

Despite the positive pre-market tone, concerns still loom as the economy remains on a shaky footing and traders have become all to used to the market trading higher and giving up those gains throughout the trading day.  The upcoming weeks are busy with investor conferences so be on the lookout for any negative commentary emanating from those get-togethers.  In terms of economic data, the only report on the calendar today is the ISM Services for August. Economists are forecasting the headline index to slow modestly from 56.7 in July to a still expansionary reading of 55.0.

It’s hard to believe after the last week few weeks of selling that the S&P 500 still isn’t even at oversold levels.  As shown in the graphic from page two of the Morning Lineup, just three sectors – Consumer Staples, Health Care, and Communication Services – are currently oversold while Energy is the lone sector at overbought levels.  While the S&P 500 isn’t oversold, it did close out last week below its 50-day moving average (DMA) along with every other sector except Energy and Utilities. 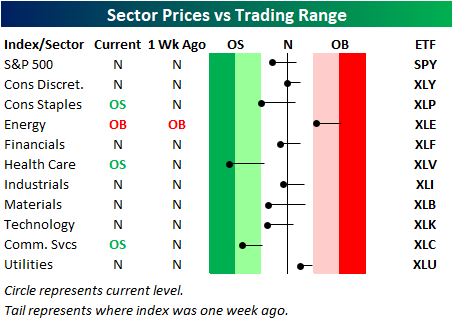