Futures were a lot higher earlier in the morning but in what has increasingly become the norm this year, those gains were fleeting.  Ahead of some important inflation data, equity futures were essentially flat, and the 10-year yield was trading down to 3.7% after topping 4% earlier this week.  Nike (NKE) has been a drag on equity prices as the stock is down 10% in reaction to earnings.  That would rank as the stock’s largest downside gap in reaction to earnings since at least 2001.  The other major report since the close yesterday was Micron (MU) and while the company lowered guidance, it’s still trading up in the pre-market.

In terms of economic data, Eurozone CPI came in at 10% y/y for the month of September which was nearly a full percentage point higher than August’s reading of 9.1%.  There’s been no let-up in inflation on the other side of the Atlantic. Over here, it’s a busy day for economic data to close out the quarter with Personal Income (inline), Personal Spending (stronger than expected), and PCE Core (higher than expected) all being released at 8:30.  Chicago PMI will be released at 9:45, and then at 10, we’ll close out the quarter’s data with Michigan Sentiment.

It’s been a lousy back half of the quarter, so just about everyone is happy to see it come to an end, but there are still 6.5 hours of trading to get through.

The Philadelphia Semiconductor Index (SOX) traded lower yesterday as it has on more than half of all trading days this year.  As a result, the index is down just under 42% from its record closing high in late December.  The current drawdown in the SOX is now deeper than the 35% drawdown from the COVID crash and ranks as the fourth largest decline from a record closing high in the index’s history.  The only three that were deeper were two 50%+ declines in the mid to late 1990s, and then the 80%+ drawdown from the dot-com peak.  The two drawdowns in the 1990s were short-lived lasting two years or less before new highs were once again reached, but the high from the dot-com peak in 2000 wasn’t eclipsed for another 18 years.  One can only hope that in the late 2030s we aren’t finally celebrating the first new high in the Semiconductor index since 2021!

Even though the SOX is down nearly 42% from its all-time high, it may sound hard to believe but throughout its history, it has been further below its all-time high than it is now 57% of the time!  With semis consistently trading down so far from record highs over the years, you would think the sector has been a bad investment.  Since its inception in 1994, though, the SOX has returned more than 12% annualized on a total return basis.  Not bad for an index down over 40% this year. 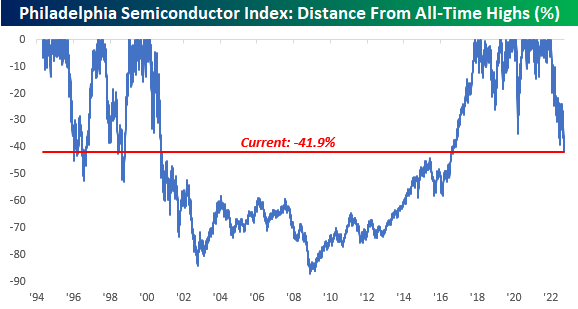