“If you don’t have a competitive advantage, don’t compete.” – Jack Welch

Futures are higher this morning heading into the opening bell, but they’re off their highs of the overnight session, and if you are sensing a pattern of overnight strength in futures with weakening towards the opening bell, you’re not imagining it.  Today marks the last trading day of the quarter and bulls will be happy to see the month come to an end.

One piece of positive non-economic news concerns COVID trends in the United States where case counts, hospitalizations, and deaths continue to roll over.

It’s been an especially rough week so far for the Nasdaq 100, and the index of large-cap tech-like stocks is down nearly 4% in just the first three trading days of the week.  At the other end of the market cap spectrum, small caps have held up considerably better as the Russell 2000 is down just 1%.  Below we show the relative strength of the Nasdaq 100 (QQQ) versus the Russell 2000 (IWM) since the start of 2020 where a rising line indicates outperformance of QQQ. Towards the right side of the chart, you can see the recent weakness in the Nasdaq 100 showing up in the chart as its relative strength versus small caps peaked in late August.  You’ll notice that we saw a similar pattern play out last year where the Nasdaq 100’s relative strength peaked at the start of September before beginning a six-month slide relative to small caps.  That period of underperformance for QQQ last year followed an insane period of outperformance earlier in the year.  This year also saw a period of strong (but not as strong as in 2020) outperformance on the part of QQQ relative to small caps throughout the late spring and early summer, so small caps are certainly due for some catch-up, but one key difference between this year and last is that the fiscal and monetary backdrop is currently much less accommodative now than it was in late 2020. 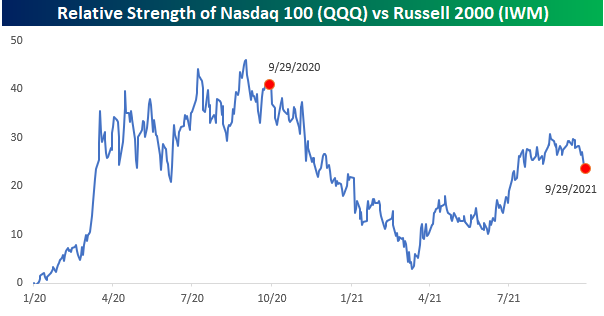